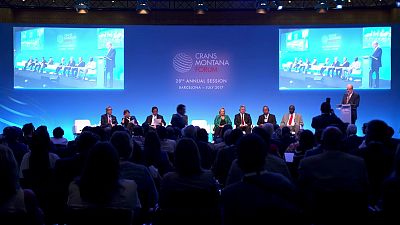 Carlos Marlasca has been reporting for euronews from Barcelona, which hosted the Crans Montana Forum 28th Annual Session in July.

All of us [...] must make sure that the local people are aware of [...] the partnership with the Chinese and they must benefit from every inch of what the Chinese people are bringing.

Energy production, migration challenges, Silk Road… Let's have a look at what happened at DAY 2 of CMF 28th Session in #Barcelona#CMF17pic.twitter.com/HSmJpySLFW

There, the far-reaching aspirations of Chinese foreign policy was one of the topics under discussion. Hundreds of political and economic heavy-weights debated plans for the “New Silk Road”. This macro project, launched in 2013 by Chinese President, Xi Jinping, aims to unite Asia, Africa and Europe by land and sea, thereby bringing a new dimension to the global economy.

The initiative includes some 60 countries accounting for 60% of the world’s population, 30% of its GDP, and 75% of its energy resources. The main investors want governments to cooperate with each other to help secure their investment.

Some of the money that has been spent has already filtered down to some more distant sections of the route.

There are a lot of smaller economies on this corridor, with a lot of natural resources, so for these economies, rather than transporting raw materials, we see that, due to this New Silk Road, the producers will come closer to where the raw materials are, and will help to this economies to create a value-added chain by developing their raw material sources into finished goods.

When the New Silk Route arrives, many of the countries along the route could see improvements in their infrastructure and transport, the deficiencies of which currently make trading difficult.

Last May the Beijing government announced a further injection of about 110,000 million euros into the project. Its total investment is expected to run into billions of euros by the time the new route has been completed.

But how will the alliances between governments and companies envisaged by the New Silk Road benefit ordinary citizens?

Despite the suspicions of countries like India about the New Silk Route, China has defended its idea as a project based on cooperation rather than confrontation.

But its position as the main investor in the Middle East and Africa has aroused suspicion.

I think that China will be obliged to respect human rights, especially the aspects related to the job salaries and the job minimum salaries and declarations, etc. So I think also that the involvement of the EU in the project will be very helpful and will be the guardian of the Human Rights in this project.

The European Union wants a stake in this potentially revenue-generating scheme. For now it has refused to accept part of the plan, citing a lack of transparency and environmental and social commitment. But European banks have already committed more than 2.5 billion euros to the project, and the current global situation could reinforce Europe’s role.

At this moment the US is hesitant and more protectionist, and this gives a very good opportunity for the European Continent in cooperation with Asia and also with Africa. We should grasp, we should take this opportunity, because if the United States is hesitant, we are automatically on the front line as Europeans.??

In Barcelona, countries and investors have shown that they are willing to work together on a project on a grand scale. But there is still a long time to go until 2049, the proposed completion date for the New Silk Road.