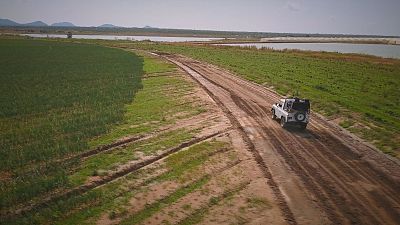 In the Seventies, Angola was one of Africa’s leading farming nations. But years of civil war took its toll on the sector which only represents 10% of the country’s GDP today.

Since the end of conflict fifteen years ago, a major effort has been made to boost agriculture – a vital necessity when you consider that Angola needs to import 80% of its consumer goods.

According to economic experts, Angola has the potential to become one of the leading agricultural countries in Africa. It boasts 58 million hectares of arable land – the equivalent of a country the size of France. The problem is that only 10% of it is exploited. This is mainly due to poor irrigation.

For this edition of Focus, we visited Angola’s largest farm. Located 1,400 metres in altitude, on the highlands of South Kwanza province, it covers 10 000 hectares. Only one third of that is being used for now, but the fifty varieties of goods produced – ranging from fruit and vegetables to milk products – yield an annual turnover of 5 million dollars.

Large, privately-owned farms like this one only represent 15% percent of Angola’s agribusiness, but half of its farmed land.

“Angola has excellent conditions for agriculture. There are many different micro-climates, there is a lot of arable land, a lot of water. We have some of the best conditions in the world for farming… Our big problem today is the workforce,” says João Macedo, Grupolider administrator.

Irrigation also represents a big chunk of the investment: the company has dug four artificial lakes and invested in state-of-the-art machinery.

In all, the company, which owns two other farms in Angola, has spent 150 millions dollars over the past six and a half years.

“Our plan is to diversify production. We also have plans in the agro-industrial business, which are already underway, and we will be investing another 150 million dollars over the next three years,” says João Macedo.

Another staple of Angolan farming is coffee. Angola used to be one of the world’s biggest coffee producers before the war broke out. Rehabilitation of the plantations has been ongoing since 2000. It’s a big investment: it takes between three to four years for a coffee tree to bear fruit.

Jorge Ribeiro was already around back in Angola’s golden age of coffee. Head of production at one of the country’s largest coffee companies, he plays a pivotal role in Angola’s coffee revival, acting as a consultant for hundreds of local producers who believe in the future of this business.

“We produce one of the best coffees in the world. Back in 1973, we were one of the four biggest producers in the world, but today production is very, very low. However, we are experiencing a real coffee revival, people are prepared to bet on the economic potential of coffee,” he says.

For the past few years, the government’s strategy has been very clear: the objective is to make Angolan coffee competitive again, so that it can reclaim its position on the global market. This requires investment and a modernisation of production techniques.

Today, just 12,000 tonnes of coffee are produced every year – that’s 20 times less than in the Seventies.

“There is a huge potential. It’s not a dream: we used to produce 200,000 tonnes a year. Our soil and climate are perfectly suited for growing coffee. What we want to do is develop this potential to boost agriculture and the manufacturing industry, as well as exports,” says Pedro Ribeiro, General Manager of Angonabeiro, one of Angola’s leading coffee companies.

And growth, it seems, is well on its way with production expected to increase by 20% this year. Positive economic prospects which it’s hoped will guarantee a sustainable source of growth for Angola and its people.