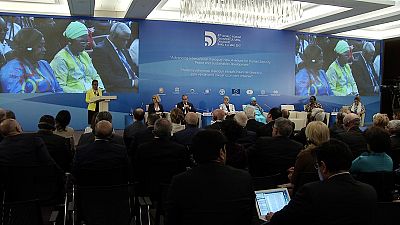 euronews, Maria Korenyuk:
“Why do young people join extremist groups? And what can governments do to stop terrorists recruiting youth? To attempt to answer these questions, high-ranking officials, activists and members of international organisations gathered in Baku for the 4th World Forum on Intercultural Dialogue.”

Organized by Azerbaijan authorities and the United Nations, this
year’s Forum welcomed members from fifty organisations who engage in combating extremism.

According to UN experts, travel restrictions to conflict zones have helped slow the flow of foreign terrorist fighters to ISIL in comparison to last year. Nevertheless, the problem of terror recruitment continues to be relevant.

Since the Syrian civil war started, the Islamic State has enlisted an estimated 30,000 foreign fighters from 100 countries. The method of recruitment differs country to country.

Alexander Zuev, Assistant Secretary-General for Rule of Law and Security Institutions, UN:
“Usually, most people are talking only about Internet-based recruitment…But at the same time, we did a number of surveys, and we realised that family environment, cultural and social groups at the community level may play a very, very proactive role in the recruitment.”

Research has found that religion is not the only reason for radicalisation. Women, who make up 10 percent of foreign terrorist fighters, sometimes join the groups after facing Islamophobic attacks or harassment. But they are usually drawn to extremist sects in following their husbands, fathers or brothers.

Mohamed Sameh Amr, Permanent Delegate of Egypt to UNESCO:
“When they discover the reality, they cannot take a step back. And at the same time they receive really bad treatment within these fanatic groups. So, I hope that through such conferences that we have here and media coverage of this, we’ll warn them about any enemies that they don’t see.”

Daniel Da Hien, coordinator, African Youth Network Coordinator:
“Many countries like mine in Africa are very, very poor. Many people don’t go to school, some don’t spend even six years in school. They (extremists) recruit those who cannot go to school, those who went to school but didn’t finish, and some of them who finished (school), but have no job. No job, what to do?!”

That’s why education and literacy are so important, conference participants say. They stress that it’s necessary to understand what’s missing in the education of those affected to change it.

Fariz Ismayilzade, Vice Rector, ADA University, Azerbaijan:
“One of the challenges that our universities face is that we are still not able to teach our students and young people how to distinguish good (things) and evil from each other. We often see that young people are so brainwashed that they believe that the negative and radical ideologies they belong to carry positive messages, carry the right message. They are ready to kill for these ideas.”

Together with a raft of measures, better job options and tolerance towards migrants, these skills may be the prevention tools needed to deter young generations from joining terrorist networks.

This year’s agenda at the 4th World Forum on Intercultural Dialogue included topics such as the role of faith, religions, migration, human security, sustainable development, preventing violent extremism and cooperation among cultures and civilizations.