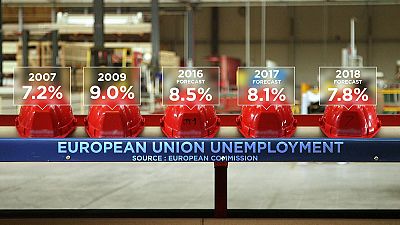 For the first time in almost a decade, all of Europe’s economies are set to grow. But major questions remain on whether that growth can actually happen this year or next with all the uncertainty surrounding us, from mixed messages from the new US administration, or a spate of elections across Europe, to worries about Brexit and China.

I’m Maithreyi Seetharaman and this week Real Economy is at the London Business School to try and analyse the road ahead for Europe’s economy.

Let’s start with the headline forecast. Across Europe, every country including the hardest hit by the recession are expected to grow, this year and the next. In the euro area growth is expected to be slower than last year but picks up again in 2018.

Now that outlook is based not just on exports growing but here’s a crash course on how inflation which has been pretty low for the last couple of years is forecast to pick up again.

Helen decides whether to buy or not depending on any increases in prices of goods and services.

For a few years she put off spending as prices were consistently falling. She thought prices would fall more.

But this weakened her buying power since, as businesses sold less, they were investing less, hiring fewer people and so wages fell.

One factor was the drop in oil prices – a major input in the economy.

In the euro area Inflation is now forecast to increase to 1.7% this year. In the EU, it is forecast to rise to 1.8%.

That means companies are predicted to increase their investments, helping grow the economy with domestic demand expected to stay strong. But if Inflation rises too much Helen’s family may not spend more.

Let’s put this forecast into context because the recovery is still slow and incomplete and that’s highlighted by the outlook for the eurozone’s four major economies. Only Germany’s outlook has been upgraded, while if you take a look at France that recovery and the growth is expected to be just a little bit more than earlier predictions.

So what are businesses expecting, considering that private sector growth in the eurozone, touched a six year high in February.

Guillaume Desjardins reports from one company in Lyon in France.

Maviflex has been manufacturing industrial doors near Lyon, for over three decades. Their doors are sold across Europe that means it is sensitive to the whole economy’s health.

The raw pieces of metal are handled, transformed and assembled by 40 workers. With the sales and support teams, it’s a total of 88 workers. More are set to be hired, thanks to business picking up again.

“Compared to 2011 for example, we’ve increased our weekly capacity by about 30 to 40 percent. We were at about 50 doors a week in 2011, and now, we’re getting closer to 85, 90 and even sometimes 100 doors a week,” explained Laurent Melia, quality, safety and environment manager, Maviflex.

The company’s growth is one indication of a pick-up across the private sector and especially manufacturing. And that’s being seen across the eurozone where other companies are also expected to start hiring.

That means unemployment in the eurozone is forecast to drop from 10% to 9.1% and that improving picture is reflected in forecasts across Europe as well.

“Over the last few months, a weaker euro has helped European exports, making these doors cheaper for foreigners, but this effect is fading slowly, so a rise in domestic demand due to a better job market situation would be welcome,” reported Guillaume Desjardins.

But with inflation potentially on the rise, impacting household spending power. Businesses now more than ever need a strategic view for growth.

“Our priority in our search for growth is abroad. A little bit in France, but mostly abroad and especially Europe,” said Anne-Sophie Panseri, CEO, Maviflex.

Considering investments slowed even prior to the crisis in Europe, companies like Maviflex are once again facing the dilemma : ‘The need to invest’ versus ‘an uncertain political environment’.

“It’s a bit worrisome, because this instability takes away some of our development outlook. We also know that electoral years in France are never very favorable for investments because everything is on hold,” concluded Anne-Sophie Panseri.

Maithreyi Seetharaman: “Joining us to analyse this outlook is one of the world’s foremost economists and professor here at the London Business School, Lucrezia Reichlin.”

‘Let’s start off with talking about uncertainty – ranging from the elections here in Europe, the US Administration, China, Brexit. How would you rank them?”

Lucrezia Reichlin: “I think if we look at the US, the uncertainty is obviously the Trump factor. And this is what’s going to happen more generally to the US Economy because many of us think that actually the US economy has peaked.

‘Europe has the problems of its own,of course. If the US was going to slow down and also be very pro-active on trade protection, Europe will be hurt. On the other hand, Europe has now a very convincing recovery.”

Euronews: “How do you start increasing investments when the worry seems to be about the US and here?”

Lucrezia Reichlin: “This is actually what we have to work on. Make sure that also the weaker companies, the weaker part of the corporate sector, benefit from the technology which is available, but I think the private sector also has to be, you know, convinced that there are prospects for growth and I think that, you know, once the political uncertainty will be cleared, I think that more optimism will prevail.”

Euronews: “Is there a missing link here because Germany seems to be the only one that is still standing.”

Lucrezia Reichlin: “Germany is growing but Spain is also growing. Actually the only you know country which has been disappointing is Italy. I think Italy now, really has to work on trying to make sure that the weaker regions within the country converge to higher growth rates.”

Euronews: “Gaining a little bit of confidence from employment numbers, some of the nominal wage numbers across Europe, what do we need to do to keep that momentum going and make it better?”

Lucrezia Reichlin: “Core Inflation, so what we call the inflation excluding food and energy is still weak so I think the Central Bank has the possibility of keeping the stimulus, but and to withdraw the stimulus right now would be actually detrimental for the real economy but also for financial stability because that would mean that the long term interest rates will start increasing and for high debt countries that would a problem. But I also think that overall, the euro area has to work on its own governance and provide an overall fiscal stimulus.”

Euronews: “How do you do that?”

Lucrezia Reichlin: “I think we should look at, we should I mean, demand to our politicians and to the economic institutions and to the economic government of the euro area and in Europe more broadly to think about policies that will help technological adoption, that will help you know to make companies stronger. I think our economy still needs a little bit of a kick.”

How should Europe react to inflation forecasts?

What are Europe’s biggest uncertainties?