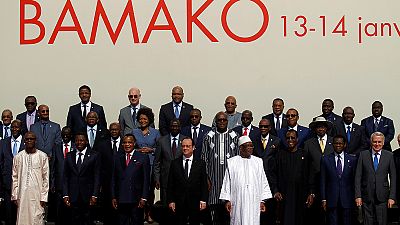 A gathering of 35 heads of state and government around Mali’s President Ibrahim Boubacar Keita in Bamako was a dream come true for the country’s authorities.

The Africa-France summit might not have gone ahead given the jihadist threat. But it happened, and it went well. And that in itself was a victory for the government.

“This summit was a success, there is no doubt about it,” Mali’s finance minister Bouboi Cisse told Euronews. “It will support the image of Mali as an attractive destination for foreign investors.”

The Bamako summit was not just a meeting of political leaders. It was also designed to win over international investors. And to inform delegates about business opportunities rather than just focusing on security issues.

“Mali is an agricultural country, Mali is a country of farming, Mali is a mining country, and all these riches are still there,” explained Moussa Ismaila Toure from the Mali Investement Agency. “The fact that we have gone through this crisis and that we are still standing gives us the advantage of saying that we have wealth. It is more important than ever to develop it, to transform it. Through this crisis, needs have increased.”

Mali has suffered from political instability, a coup in 2012 and jihadist activity in the north and Bamako.

Just over a year ago, the capital of Mali was hit by a bomb attack which resulted in more than 20 deaths at a hotel. It has since reopened, showing, in a way, a real willingness to move forward.

But how can a territory twice as big as France be secured? It is a huge challenge, particularly in the north of the country. To help Mali in its efforts, the government has received the support of the international community.
Since 2013, the UN has deployed a stabilisation mission, MINUSMA.

“To say that we have achieved stabilisation or that security has been achieved, especially regarding goods and people: no, that is saying too much,” Mahamet Saleh, head of MINUSMA told Euronews. “It’s a slow process, but we can say that there is hope that things are getting better and better. We have come a long way, but things are slowly changing.”

A peace agreement was signed in June 2015 between the government and several armed groups.

A national conference scheduled for March aims to speed up the implementation of this agreement.

The population of northern Mali hope that better days will come.

“We feel that it is rebuilding slowly, where there is a little stability, where the armed forces and the United Nations are present, we can still live, we can rebuild, so there is hope,” said Oumou Sall Seck, Mayor of Goundam.

How will this hope be fuelled? Security measures on their own are not enough. They need to be combined with a policy of development: investing in schools, vocational training and health, to open up new opportunities for locals.

“There is no lasting security, whatever the military interventions, without having development policies in place before, during and after those measures,” Remy Rioux, head of French Development Agency (AFD) told Euronews. “The crisis has caused security issues for development agencies, and those difficulties are not over yet, but now the international financial community is back in Mali.”

“The most important thing is that violence is renounced and that we can regain cohesion, that we can rediscover this common sense, unite in a common destiny, so that we can move forward,” said Soumeylou Boubeye Maiga, Minister-Secretary General, Mali Presidency.