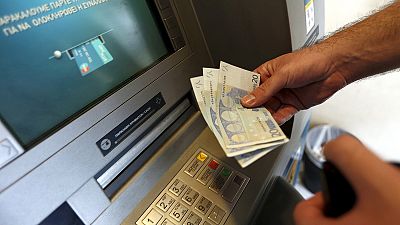 Many of us tune out when we hear words like ‘banking’ or phrases like ‘banking union’ or acronyms like CRR, CET or NPL…thinking it doesn’t impact our lives!

We know that since the crisis banks have had a tough time lending to businesses, to you and I.

This edition of The Real Economy looks at the new banking regulations and what they are going to do to encourage banks to lend to the real economy.

Euronews put that question to Valdis Dombrovskis, Vice President of the European Commission, the man in charge of the euro and our financial stability

Maithreyi Seetharaman, Euronews:
What are these new proposals? Can you explain them?

Valdis Dombrovskis, European Commission:
One is to that if things come, go wrong taxpayers are not the first in line to pay for a banking sector mistakes. And second, to preserve the diversity of Europe’s banking sector and ensure lending to the wider economy.– Putting stricter capital and other requirements to the banks; ensuring that even the biggest banks – what are called globally systemically important banks have enough own resources so that they can be resolved if things go wrong; And at the same time looking how we can facilitate lending to the economy, lending to the small and medium enterprises

Maithreyi Seetharaman, Euronews:
Is there anything specific you think will help citizens be a little more reassured that our banks can lend more?

Valdis Dombrovskis, European Commission:
“Some of the specific proposals like leverage ratio, like net stable funding ratio, like fundamental review of the trading book. Those measures are there to reduce risks in the banking sector. And then while reducing risks we also need to see how we facilitate lending, and one of the areas is through targeted amendments on for example reducing capital and other requirements on banks if they are lending to the small and medium enterprises or when different financial sector players are financing either infrastructure projects or infrastructure companies.”

These proposals have come after in-depth consultation with European banks. They have spent the last couple of years checking the regulation boxes with stress tests, capital requirements. But SMEs are still having a tough time getting loans and investors seem unduly concerned about the health of these banks. So Guillaume Desjardins set out to find out why.

“Wait! I thought banks were ok after the stress tests in July and they were being monitored and regulated under Europe’s banking union!

“Makes me wonder if my bank is still alright.”

Guillaume Desjardins:
“Alright, every one seems calm in there. But then why do investors seem all worried.
Since the beginning of the year, banks shares have been going up and down like a yo-yo.”

Investors have priced in elections, oil levels and macro influences, but contagion from under-performing Italian banks and the biggest European banks being fined, are making investors like Pascal Bernachon uncertain.

Guillaume Desjardins:
“If we look inside the banks, their P&Ls are in the green?

Pascal Bernachon, Head of Asset Management, KBL Richelieu
“Banks profitability is way under what it used to be. Why? On the regulation side, there is a negative factor. Second factor, companies have started to find funds, not through the banking system, but directly from the market.

“You had, at the same time, I would say, all the mistakeslaundry from the past. You were showing Deutsche Bank, let’s not forget that DB was fined a so-called $15 billion fine.”

“Fines for bad behaviour that stemmed from too little regulation to what many now think is too much. Making sure banks have safety nets like capital requirements and controlling ‘non-performing loans’ to ensure taxpayers won’t have to bail them out is blocking banks from lending.”

Guillaume Desjardins:
“Among the European banks, there are 13 that are so big, so important, that we can’t let them go down, they are called systemic banks. This means that in case of a problem, the taxpayer will be the one paying.”

So how do you balance taxpayer protection with lending in economic growth? We went to the European banking authority – the stress tests masters – to find out.

Piers Haben, Director of Oversight, European Banking Authority:
“Knowledge about the banks is the key, as long as those banks themselves have addressed legacy problems and are geared towards the future and a sustainable future. All of the studies show that it is only well capitalised banks that are able to lend into the economy in good times and bad. A thinly capitalised bank is not able to lend into the real economy, except by excessive leverage which is highly volatile, highly risky, and can end up damaging the economy.”

It will be a test for proposed European rules to see if this time, banks can actually work FOR the economy.

European #banks went through a rough 2016. #RealEconomy goes to Paris, London and Brussels to find out why, and if YOUR bank is safe. #Yoyopic.twitter.com/xoDVeHMFRf

Maithreyi Seetharaman, Euronews:
“These new proposals, some are anticipating that banks are going to be forced to raise billions in new debt. How is that going to impact their lending behavior and how are national governments reacting?”

Valdis Dombrovskis, European Commission:
“First, it’s clear for banks to lend to the real economy they also need to attract this financing in the first place. the proposal on Total Loss Absorbing Capacity – it tells that banks must raise resources in a way that it can be bailed in… what we are saying is that there should be enough creditors for the bank whose loans can be used to absorb bank losses, if this becomes necessary. That is what is called the bail in. It’s as opposed to the bail out by the tax payers.”

Explainer: Bail In and Bail Out

Maithreyi Seetharaman, Euronews:
“Do you think these proposals are going to allow European banks to be in a stronger position and under what rulebook?”

Valdis Dombrovskis, European Commission:
“The position Europe is taking that completion of Basel lll should not lead to the overall substantial increases of the capital requirements.

“First we need to have a strong and stable banking system and not to go back to the model which was there before the crisis – whether it’s lots of deregulation and banks were taking excessive risk; in several countries we still have high levels of non-performing loans in the banking sector and we work closely with those countries to actually resolve this problem holding back banks from new lending.”

Maithreyi Seetharaman, Euronews:
“Do you think this is finally going to convince everybody to get on the European Deposit Insurance Scheme, the Ultimate backstop to protect the tax payer?”

Maithreyi Seetharaman, Euronews:
“Mr. Dombrovskis thank you for your explanations.”

Q. What are the new European Proposals targeting to change in current banking regulations?

Answer: the Commission has proposed amendments to the capital requirement directive and regulation (CRR/CRD) set out by Basel III. The amendments include measures that will strengthen the resilience of the banking sector by introducing more risk-sensitive capital requirements. At the same time, the new measures will make CRD/CRR rules more proportionate and less burdensome for smaller financial institutions and will improve banks’ lending capacity to support EU economy.

Q. What are the new banking regulations proposing, to increase bank stability and lending into the Real Economy?

“More about the new banking package:“http://europa.eu/rapid/press-release_MEMO-16-3840_en.htm?locale=en

Q. What is Basel III?

Answer: “Basel III” is a comprehensive set of reform measures, developed by the Basel Committee on Banking Supervision, to strengthen the regulation, supervision and risk management of the banking sector.

LR – Leverage Ratio : The leverage ratio is the proportion of debts that a bank has compared to its equity/capital. More here

TLAC – Total Loss Absorption Capacity: The Basel committee’s regulations on many of the world’s biggest lenders. TLAC mandates these big banks meet the minimum requirements of holding 16 percent of consolidated risk-weighted assets by 2019, which is then expected to rise to 18 percent by 2022. More Here

NSFR – Net Stable Funding Ratio : banks must maintain a stable funding profile in relation to the composition of their assets and off-balance sheet activities. More Here

CRR/CRD: Capital Requirements Regulation & Directive : The minimum required capital to be held by banks, determined by their regulator . The primary function of capital is to act as a cushion to absorb unanticipated losses and declines in asset values that could otherwise cause a bank to fail, and provide protection to uninsured depositors and debt holders in the event of liquidation. More Here

FRTB – Fundamental Review of the Trading Book: A requirement to have more risk-sensitive own funds (i.e. capital requirements) for institutions that trade in securities and derivatives. More Here

BRRD – Bank Recovery and Resolution Directive: determines the rules for how EU banks in difficulties are restructured, how vital functions for the real economy are maintained, and how losses and costs are allocated to the banks’ shareholders and creditors. It provides more comprehensive and effective arrangements to deal with failing banks at national level, as well as arrangements to tackle cross-border banking failures. More Here

SSM – Single Supervisory Mechanism: European Central Bank as supervisor, to signal when a bank in the euro area or established in a Member State participating in the Banking Union is in severe financial difficulties and needs to be resolved. More Here