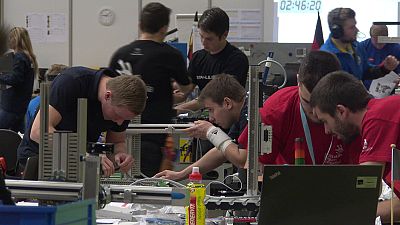 Young people from more than 30 countries were in the Swedish city of Gothenburg to take part in EuroSkills 2016.

Laying bricks, installing water pipes, or setting up the electrical circuitry for a smart home are just some of the tasks at this professional competition for the under 25s.

Each participant has chosen a vocational career and are champions in their home countries. This time, however, they have a bigger challenge on their hands.

“We have 492 competitors, they are competing in 42 competitions and they have to compete in their field of occupation, that means they have to solve a problem,” Hubert Romer, WorldSkills President, told Euronews.

Good luck to all competitors and experts on the first competition day! Yesterdays opening was great. #euroskills#thepowerofskillspic.twitter.com/2LHL01LmSK

The largest national team was from Russia, and this in itself was a kind of victory: the country only joined the global “WorldSkills organisation four years ago.

Other countries, such as Spain and Portugal, have been taking part since the 1950s.

“All of Europe considers the European championship a very important step towards the World competitions which will take place in Abu Dhabi in 2017, and in the Russian city of Kazan in 2019,” Robert Urazov, General Director of WorldSkills Russia, told Euronews. “It is also an opportunity to get as much information gain as many new skills as possible to bring back home.”

Just like sports contests, start and finish times, as well as breaks are controlled. What counts here is speed.

Participants are not allowed to speak while working, neither with journalists nor with thousands of fans. One word, and they’re disqualified.

“There is a lot of stress because people walk past, the experts watch us, and that puts us under a lot of pressure,” tiler Mihail Uhankin explained to Euronews. “Sometimes it is hard to work, so I try to ignore them, try to focus, concentrate and just work calmly.’‘

Over 60,000 people have visited #EuroSkills so far. Here's a glimpse of what they've seen over the last two days… pic.twitter.com/5FOfFXFbLu

Each skill has its own team of well trained and highly qualified judges. They literally watch every movement. The rules of judging are different for each skill, but there is one thing in common – every detail counts.

“We evaluate the length – is it correct? Is the height correct here, have all the joints been done correctly?,’‘ Chief Expert Kai-uwe Holtschmidt told Euronews.

Taking care of an intoxicated client in a hotel reception and performing mesotherapy at a beauty salon are very different skills. But there’s one crucial thing everybody needs to succeed – skills in the English language.

Every EuroSkills competitor has a very high chance of getting a top job. Julien Baton from France is a bronze medal winner and that has opened the doors to his dream career.

Frenchman Julien Baton, a bronze-winning stonemason told Euronews that when he was eight years old, he started working with stones he found near my parents’ barn, and it became his passion.

About 70,000 people visited EuroSkills over three days. Many are headhunters who say it’s the best place to find the best workers.

‘‘Participants if they win here they are probably three years ahead technically than where they would have been,’‘ said Simon Bartley, President of World Skills International.

“You performed brilliantly in many events and demonstrated excellent professional skills, serious creative potential, and the ability to compete as equals with strong and worthy rivals. Well done!

“I would like to note that the authorities will continue to pay constant attention to training qualified specialists and introducing the latest education standards to our training establishments. I see this as a guarantee of our economy’s successful development and greater competitiveness.”