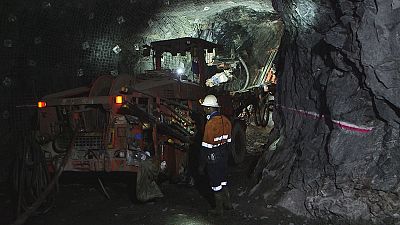 We are a hundred meters underground, in the tunnels of the Bagassi gold mine. It’s one of eight in Burkina Faso and operated by Canadian company Roxgold.

Its goal is to mine 3 tons of gold every year for 10 years.

Mining revenues amounted to the equivalent of 255 million euros in 2015.

“The sector must be competitive, the mining code must be attractive, as well as the supporting infrastructures such as electricity, water, roads … infrastructure as a whole,” said the Burkinabe Prime Minister Paul Kaba Thieba. “The business environment must be favorable. That is what my government is working on.”

As well as gold, Burkina Faso’s soil contains other riches such as manganese, zinc or phosphates, providing many investment opportunities in the sector.

That brings stable job opportunities: up to 17,000 jobs are expected to be created in the mining sector.

Training is vital. Euronews spoke with Moumouni Séré who set up the UI2M Mining Training Institute after returning from a stint in the United States.

“Up until now, qualified expatriates have been hired to work in the industry because there is no local expertise,” Séré explained. “It is important to improve training. Qualifications usually lead to job opportunities in the mining sector.”

The Burkinabe government wants as many people as possible to benefit from the wealth generated by the mining sector.

“The philosophy is to say that, given that mines are a promising sector for the Burkina Faso economy, people also need to feel the added value of the mining sector,” Hadizatou Rosine Sori-Coulibaly, Burkina Faso Economy and Finance Minister, told Euronews. “We want to work for the benefit of not only those working in the mining sector but for all local people.”

The local economy has been booming since the mining giant set up operations here. Young people in villages near the mine work as guards or drivers.