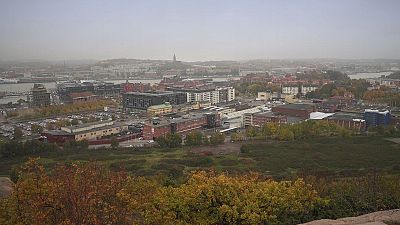 In this episode of Business Planet Serge Rombi reports from the Swedish city of Gothenburg.

Serge Rombi:“This week we are here in Gothenburg. It is in this neighbourhood which is among the most disadvantaged in the country that thanks to Daniela Ölmunger one of the most beautiful entrepreneurial projects in Sweden has been created. “

Daniela Ölmunger : “It’s about opportunities and dreams in a district challenged with over 50% unemployment, gang crime and very low school results. And the idea was to create a real hub for people with business ideas.”

Euronews “Let’s straight away see a concrete example of this.”

Helena Mansas lives in this district and is a former graphic artist. She has had a career switch to an unusual activity.

In 2012 she had the idea of creating what she called a hotel for plants, in other words, a place where she kept and pampered the plants of individuals and companies during the winter season.

Aware that she needed to be supported, Helena approached Daniela and got a lot of good advice.

“The project has helped us with experts on business development and we have received good legal advice on how set up our legal contracts. We also have had very good opportunities for networking and access to meeting venues where we have the opportunity to connect with other entrepreneurs, among other things,” Helena explained.

And the results are visible. Not only has Helena succeeded in maintaining her business, but she has developed it, creating two other sites for the care of plants, and diversifying with the sale of her homemade marmalade. Very soon she could be in the position to hire her first employee.

Euronews:“What advice would you give Helena to progress and to develop her business?”

Daniela Ölmunger: “Franchise the plant hotel and have hotel Dalhia all over Sweden. And also with the marmalade, I think in three to five years you could have this as the most known edible souvenir from Gothenburg.

Euronews: “And Daniela you can tell us what you have achieved so far .”

Daniela Ölmunger: “One hundred and seven new companies started. And behind every company, it’s a real person, a new role model for this community. And you know, if they can do it, so can you!”

Daniela’s project has just received a very prestigious award: the Grand Jury Prize of the European Prizes for the Promotion of Entrepreneurship

Organized for 10 years by the European Commission, this competition has highlighted hundreds of entrepreneurial and job-creating initiatives.

Euronews: “And Daniela, your work here is not over, you have even launched a new project, especially for migrants.”

Daniela Ölmunger:: “It’s very important. They really want to contribute. They don’t want to be on social benefits. Ans many of them ran their own businesses before, successfully. So they can do exactly the same thing, but here,” she concluded.