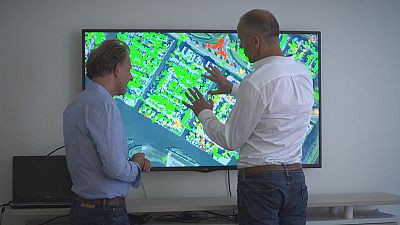 Ivo Visser is a risk analyst for a major energy utility based here.

“In the Netherlands the ground moves a lot causing problems for our underground gas pipes. Using Copernicus’ data, we are able to predict these movements.”

The maps that show the potential underground instability risk for the gas network are produced near Rotterdam, in Delft.

“What we produce here is a map of how rapidly the streets and the homes in the city of Rotterdam are subsiding. The color of the dots tells you, for each of these locations, how fast it’s going down.”

This sharp idea is accurate to within a millimetre, and it has considerably modified the way the big energy companies monitor their networks.

“Before we came along, the only way that Stedin, (Dutch gas and electricity company), could assess if there was a problem with a gas pipeline as a result of some subsidence was essentially to send out two people in a car who would have to dig a hole and visually inspect it,” smiles Pieter.

This application is also used in other fields like oil exploration, mining, dams and railways. and it is a booming market. Pieter has already grabbed 200 clients around the world and is counting on tripling his turnover in 2017. Twenty-five people work here and in offices in Houston and San Francisco.

“Copernicus is currently acquiring these radar images proactively over large parts of the world. And it really enables us to essentially go and deliver this product anywhere,” says Pieter.

Serge Rombi, Business Planet:
“So Ivo, what has been the overall impact of this new technology?”

Ivo Visser:
“We know how the ground moves, we can improve our maintenance planning, so the safety of our infrastructure network is increased and we are able to save up to 90% in costs in some cases.”

The European Space Agency’s Copernicus Earth Observation satellites are having areal impact on businesses. It is estimated they have been able to generate up to 15,000 jobs per year, and main backer the European Commission wants to further strengthen this economic booster.

euronews:
“What advice would you give, Ivo, to anyone wanting to develop this sort of project with success?”

Ivo Visser:
“Work together on a tailor-made solution for a problem. That’s how we did it !”