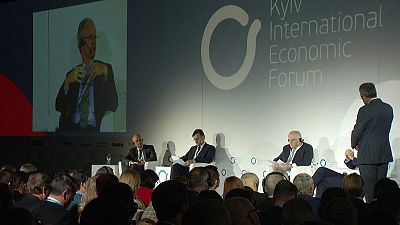 Are foreign companies ready to invest in Ukraine, given the military conflict in the east of the country?

That has been a key topic up for discussion at the Kyiv International Economic Forum – which welcomed hundreds of economists, politicians and business officials from over 20 states.

During the event’s opening, Ukraine’s prime minister said the priority is to phase out dependency on international loans and for the country to start generating its own funds – mainly by attracting investment from abroad.

“Ukraine has received 2.8 billion dollars in foreign investment for the first six months of 2016. This volume is two times higher than in 2015. However, I’d like to emphasise that Ukraine could have received much more,” said Volodymyr Hroisman.

Statistics confirm that current inflows of foreign investment are insufficient.

Investment volume per capita is five times less than in Poland and ten times lower than Estonia, according to Ukraine’s Business Ombudsman.

Euronews’ Maria Korenyuk reported: “The main reason for that is not only the military conflict in Donbas. Corruption and lack of trust in the judiciary in Ukraine are the largest obstacles for foreign investors.”

They were the results of research carried out by Dragon Capital investment bank and the European Business Association.

More than 100 respondents were surveyed – those who plan to invest in Ukraine.

“The three largest obstacles for foreign investors were obvious (clear). However, the fact that corruption won by a wide margin was bad news for me,” commented Eugene Baranov, Managing Director of Dragon Capital.

“But we need to understand that when investors assess a risk of conflict escalation in Donbas and a risk the corruption level will stay the same, the last risk outweighs.”

They also want prosecutions of high-level officials and judges suspected of corruption.

“The Council of Europe actually has done so for more than 10 years. And so we hope we will make now a significant change over the next years.”

Those attending the Kyiv International Economic Forum agree that if the Ukrainian government implements reforms, the country can become an attractive place for foreign countries to bring business.

“Ukraine is a country of the greatest potential in Europe. Right now, it’s one of the cheapest labour (markets) in this part of the world. Hourly Wages in Ukraine are 50 percent of hourly wages in China,” said Krzysztof Siedlecki, President of the European Business Association (EBA) Board.

To create conditions for attracting investment in Ukraine, the country’s government is launching the Investment Support Agency. It is due to start operating in mid October.

It is a move that is welcomed, but forum participants say changes in legislation are vital too, to protect investors.

All of the recommendations from the event are being passed on to the Ukrainian government.