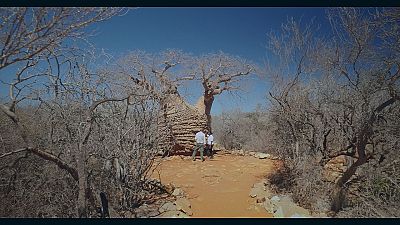 Target Madagascar continues this week in the south west of the island, in one of Madagascar’s 43 national nature reserves. It is a region of exceptional natural beauty, extraordinarily well-preserved.

Tsimanampetsotse park spreads over more than 200 000 hectares, the size of the Tokyo metropolitan area.

This park is one of the jewels in Madagascar’s biodiversity crown. In this one park there are 300 indigenous fauna and flora species. It also has the island’s only saltwater lake, one of the only places where pink flamingos come to nest.

It contains one of planet Earth’s oldest living things, the “grandmother” baobab, the oldest tree in the park. It has been scientifically dated at 1650 years old.

The idea is to protect this exceptional natural wealth and ensure that it lasts, and also to use it to attract investors. Plots of land in about 10 of Madagascar’s parks are to be released as concessions to develop eco-tourism and build eco-lodges. Three are to be built near a cave complex.

“We are not going to be building five-star palaces. We will build a sustainable, environmentally-friendly infrastructure using renewable energy and, for example, doing away with things like 24-hour air conditioning,” says Madagascar National Parks Marketing Director Alexandra Erick.

To stimulate activity in the park the team has come up with a big idea.

They are going to organise visits underground and take tourists cave-diving so they can discover fossils like giant lemurs and crocodiles.

The governing philosophy of Madagascar’s natural parks is joint management with the locals. They will be the ones who benefit the most from park activities. Last year this system raised 2.3 million euros of direct benefits for the local populations.

“Thanks to the investments jobs will be created along with local training schemes. This will increase Madagascar’s capacity to welcome tourists, with more rooms and beds, and so attract many more tourists,” says Erick.

The island wants to attract investors, but not at any price. All the investors we spoke to said they were investing in eco-tourism because they had fallen in love with the place, and its ethics.

“I think Madagascar needs investors who really love the county first and foremost, who are not looking for quick profits, but who realise that with development, the profits will eventually come,” says ecotourism investor Patrick Cejudo.

Eco tourism is one of the economic development levers Madagascar is pulling hard, but only on condition that the island’s fabulous biodiversity is not endangered.