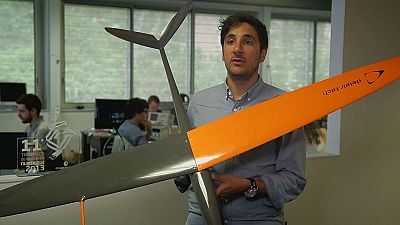 Serge Rombi, Euronews:For the latest episode of Business Planet we are in Lyon, at the global headquarters of Euronews. Peter, you are going to tell us about the enormous business potential offered by the use of civilian drones.

Peter Van Blyenburgh, DroneRules.EU Consortium:
“The potential of the market is enormous. The forecast of the European Commission is that between 150 and 200 000 new jobs would be created in the next 20 years.”

Serge: Come with us as we visit a small business in France that is making headway in this market.

Toulouse is the heart of France’s aerospace industry.

It is also the home of the world leader in the development of professional drones. The start-up “Delair-Tech” makes devices that gather data for the construction, power and transport industries as well as agriculture.

Benjamin Benharrosh is the co-founder of Delair-Tech.

“We have developed our drones to be particularly enduring. They are completely autonomous and can fly for 100 to 150 kilometres or for two to three hours.”

The company does more than just manufacture the drones. A whole range of services are offered based around the gathering and interpretation of data.

“There are 400 000 kilometres of power lines in France and they need to be inspected every year. By using drones instead of the traditional methods, it could be two or three times less expensive,” Benjamin says.

The potential market is huge. By the end of this year, the company is expecting to expand from 60 to 90 employees and has just agreed 13 million euros of capital investment.The aim is to finance more development, particularly overseas.

Today, we are at #Abidjan, #COTEDIVOIRE to talk about civilian #drones & geographical information #systempic.twitter.com/VYJfCGfRDn

“These days, our drones can be found in 30 countries. We are already developing overseas: we are opening a branch in California and offices in Australia and China by the end of the year,” Benjamin continues.

Serge: Peter, you are working with top European experts to raise awareness among entrepreneurs like Benjamin of the best way to access this market.

Peter: “Yes. The objective is to make possible for current and future RPAS (drone) operators to understand the responsibilities and liabilities, what they have to do concerning data protection and privacy, and the regulatory situation in the various countries”.

This is the reason why this project, funded by the European Commission, is very helpful for SMEs which want to explore the new business opportunities offered by drones.

Serge: One last question. If I were an entrepreneur like Benjamin and, like him, I wanted to make the most of the opportunities the market offers. What would your advice be?

Peter: “The most important thing for a new RPAS operator to understand is that he is part of aviation, which brings with it a whole bunch of rules and regulations, responsibilities and liabilities.”

Serge: Thanks, Peter. There is more information on our web site. See you very soon on Business Planet.