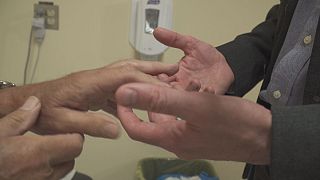 Family doctors are being given new skills in an initiative to bring down waiting times for arthritis patients in Halifax, eastern Canada.

This project allows the rheumatologists to work on early diagnosis, and frees up some of their time, so that the general practitioner can see the more stable patients

The idea is that specially-trained general practitioners can carry out routine check-ups on stable patients, saving them a long wait to see a rheumatology specialist.

“The training really was informal. I basically began by shadowing all of the different rheumatologists who work at this clinic and over time developed clinical skills that would allow me to be able to see patients independently,” explained Dr Samuel Hickcox, a family physician with the Nova Scotia Health Authority.

Dr Hickcox, the nursing team and physiotherapists are all collaborating in the initiative that now allows patients to be seen when they should.

“So a typical patient would enter the clinic, they would see the rheumatologist and a nurse at one appointment;” said Hickcox.

“Six months later they would see a physiotherapist, a nurse, and myself, and we would essentially alternate those two types of clinics.”

Euronews’ Jeremy Wilks reported: “The project here in Halifax, Nova Scotia may seem at first glance like a local solution to a local problem – there aren’t enough rheumatologists, and so the family doctor steps in to help out.

“But in fact all around the world you find the same issue – long waiting times and a lack of specialist staff. So could this approach be the solution?”

That is certainly the view of Randi Monroe, one of the healthcare managers in Halifax who championed the initiative.

“The World Health Organisation will often say ‘collaboration is our future’: we’re heading into an era where we are on the ‘grey tsunami’ (ageing population) where there are lots of people who need lots of care,” said Monroe, who is Director of the Nova Scotia Rehabilitation & Arthritis Centre.

And giving new skills to family doctors is part of delivering that care, together with genuine collaboration.

Monroe commented: “We cooperate, everyone is pleasant, everyone is nice, I might say ‘this is what I found the patient was doing and you may say (something else), but collaboration is when you truly have one goal, the patient is deciding the goal, they are determining what they want to see happen, and everybody is feeding into that.”

Nova Scotia is a popular place to retire, and a quarter of the population has arthritic problems.

So, giving new skills to family doctors to treat stable patients means rheumatologists can focus on seeing new patients instead.

That is a big advance for those with suspected rheumatoid arthritis, according to charity leader Susan Tilley-Russell:

“We’re racing against the clock. We have three to six months from the onset of symptoms before potentially permanent joint damage can occur,” said Tilley-Russell, who is Executive Director of The Arthritis Society, Atlantic Region.

“So this project allows the rheumatologists to work on early diagnosis, and frees up some of their time, so that the general practitioner can see the more stable patients.”

Hickcox added: “A family physician has a very broad understanding of how to screen a person for a number of common chronic medical diseases, how to manage a patient from a potentially more holistic perspective, how to interface with other family doctors and communicate them in order to communicate with them in order to build collaboration out in the community.

“So it’s our assertion that ultimately it is a better model of care.”

A similar project to give new skills to family doctors is underway at another clinic in Nova Scotia, with plans to further repeat the model in other provinces of Canada.