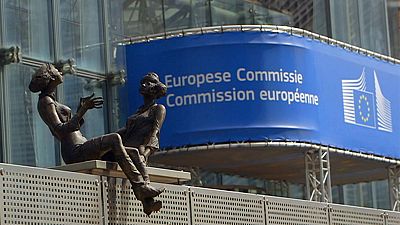 This edition of The Real Economy turns the spotlight on the hotly debated issue of deepening Europe’s Economic and Monetary Union (EMU). What does it mean for people living and working in Europe? What’s the plan? And is it even achievable in these difficult economic times?

On fiscal policy, no real progress has been made. And on political union, we have only to look at the present crisis to see how far people are away

Crash course: the euro and EMU

Europeans in 19 countries use the euro, with the rest of the EU destined for it – with the exception of the UK and Denmark.

A sluggish economy and 18 million unemployed in the eurozone puts massive pressure on the action plan of the five presidents of Europe’s key institutions to deepen the EMU. So where do things stand today?

Maithreyi Seetharaman, euronews: “Let’s talk about Stage 1 because fiscal board, deposit insurance, the IMF representative – nothing specific has really been announced.”

Valdis Dombrovskis: “Well there I would like to make a correction. Right now the Dutch Presidency is intensively working on those proposals. It concerns completing the Banking Union including the creation of a European Deposit Insurance Scheme.

“It concerns a Commission proposal of setting up a European Fiscal Board – where the work is already ongoing and also a legislative proposal on the external representation of the Euro Area in the IMF is also filed by the Commission.”

euronews: “How close are we to achieving any of those, because 2017 is not that far away?”

Valdis Dombrovskis: “Exactly, the time frame is quite ambitious. So last December the European Council tasked the finance ministers to work intensively on this and to report back to the Council by June this year and If needed are ready to modify our proposals in order to achieve consensus on those issues.”

euronews: “Next steps necessary – also mentions a political union. What is that because no one seems to be able to give me a definition?”

Valdis Dombrovskis: “Well on political union, it means strengthening the democratic legitimacy of our decision making as regards economic and fiscal policies. This is one element which has been discussed, often criticised.”

euronews: “Does it mean loss of sovereignty?”

Valdis Dombrovskis: “Well, stronger involvement of national parliaments actually means stronger sovereignty if you want. It’s also worth headlining that it will mean also more common decision making and of course it will imply some sovereignty sharing. And we will need to find the right balance between sovereignty sharing and risk sharing.”

Divergent economies, stagnation, unemployment – they all have the potential to make the disenfranchised even louder in their skepticism.

Debates around Brexit and immigration all derive from that.

Differences between eurozone countries can be considerable. The challenge is to get everyone to agree.

“There is more work to be done on the banking union,” said Christine Lagarde, Managing Director of the International Monetary Fund.

“There is more to be done in terms of coherent, cohesive supervision. And a clear delineation between who does what, when in that area, and I think the political union clearly warrants more efforts.”

And it is a complex dance still being choreographed, with finding a balance between the goals of each member state on the euro stage the only way to reach a consensus.

“Countries don’t want to give out their sovereignties. Political leaders want to maintain their degree of freedom, and national parliaments don’t want to delegate their authority to the European parliament,” explained Daniel GROS, Director of the Centre for European Policy Studies (CEPS).

In order to deepen the EMU, four pillars will need to be tackled: the fiscal pillar, the financial pillar, the economic pillar and the political pillar. But they do not all face the same challenges.

Gros commented: “It’s a particular problem with the European construction. Many people say ‘ok, we propose this construction because this year, this is the best for us.’

“And they don’t think about the 20, 30, perhaps 50 years where this construction has to serve many other purposes.

“On fiscal policy, no real progress has been made. And on political union, we have only to look at the present crisis to see how far people are away. So I think outside of the financial area, it’s very difficult to make progress.”

Inking an agreement is complicated.

The first obstacle is getting it signed at a national level, with referendums or parliamentary agreements.

Then a second obstacle: the complex rules at the European Level to make it legally binding, which sometimes can mean treaty changes.

“A treaty revision is achieved through the agreement of all member states, and there may potentially be a need for some to hold a referendum. And this is extremely problematic,” said Marianne DONY, European Law Professor at the Université Libre de Bruxelles.

Other current European issues, not related to economics, could create a diversion on the path to a deeper EMU.

It is going to be a tough road ahead to keep to deadlines.

The first test of the commitment of European citizens will be in June when the UK holds its membership referendum.

Maithreyi Seetharaman, euronews: “Are you hearing any criticism of, for example, the fiscal board not having enough teeth, the Competition Board not making sense across the 28?”

euronews: “Do you think member states will accept it because ‘more Europe’ seems to scare people?”

Valdis Dombrovskis: “If you look at Economic and Monetary Union during last couple of years, lot of things had been done actually to deepen the EMU already.

“It couldn’t have been much more, but stability of the Euro area as a whole was not questioned. So, lots of things had been done already during the last couple of years which needs to be acknowledged.”

euronews: “Divergence in our economies is creating this wall against a deeper union. If we haven’t sorted out that, how do we deepen?”

Valdis Dombrovskis: “Unfortunately since the financial and economical crisis, this process has stalled and this is underlying the motive of completing the Economic and Monetary Union.”

euronews: “Would the convergence take back into consideration the fiscal transfers that do tend to take place?”

Valdis Dombrovskis: “We already have EU budget and certain policies which ensure fiscal transfers among member states. The five presidents’ report actually explicitly mentions that it is not meant to be a new permanent transfer mechanism.”

Valdis Dombrovskis: “We need strong economic fundamentals, to deal with different challenges which we are facing with – refugee crisis, with security challenges and also to convince our citizens that there are benefits in the European project, that we are better off together and people start seeing tangible results of an economic recovery also in their pockets.”

euronews: “Are the British people listening?”

Valdis Dombrovskis: “In economic terms, it’s a much better result both for UK and EU as a whole, it’s for the UK to stay within the EU.”

Empowered or Not: Plan for Deepening EMU