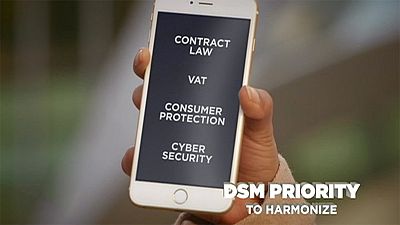 In this edition of Real Economy we look at the priority in Europe to connect the digital single market for both consumers and businesses.

We know one of the pillars for Europe is the freedom of movement of physical goods, services and people. But our online world is not so seamless – European cross border digital sales are dismal compared to national services or even those based in the United States.

The Digital Single Market or DSM can potentially add 415 billion euros to Europe’s growth and potentially hundreds of thousands of jobs – so here’s the coding for how to make that happen!

But for this to happen The Digital Single Market needs to connect them by removing barriers and allowing the free movement of people, services and capital in the virtual world.

Mary and Fred both need DSM’s harmonized rules on contracts and consumer protection to trust each other.

This will allow both to know there is fair competition, and their data is protected no matter where they are in Europe.

Making rules simple will allow Mary to scale up and cut costs with falling parcel delivery and simpler copyright, VAT and set up laws across countries.

DSM means more broadband infrastructure and an end to roaming charges – so more of us can get online like Fred.

DSM and the future for SMEs

Whether they are good old stores reaching for the web or pure players, these platforms that only exist on the internet, e-commerce has gone through a boom in the recent years.

But in order to grow even more in Europe, these businesses will need a more fertile legal and fiscal environment.

“In our ultra-connected era, about 4 in 10 Europeans shop online from their own country, but only 15% make cross border purchases. Captain Train is a startup which is specifically targeting cross border customers. I went to ask them why so few shop online across borders,” explained euronews’ Guillame Desjardins.

To hop on board the European market, the French company has had to adapt to little differences in local legislations

“It causes a lot of trouble, because at state levels, we have reforms every six months, every year, on various subjects, either on digital regulations, business law, labor law, that we need to pay attention to, and this in each country.

‘We need a unified system, a simple system, where the rules of the game are the same for everyone, because the time we spend understanding the rules to the game is time we don’t spend doing business, creating value,” opined Jean-Daniel Guyot, CEO and Co-founder, Captain Train.

The European Commission evaluates this cost at 9000 euros for an SME. To solve this, it is working on a plan to create a true digital single market. Because if the law is complicated for e-commerce professionals, it also is for the regular Joe trying to shop online.

“Trust is really the first point that professionals need to focus on. It is through that point that you can attract consumers, especially since we are no longer in the old system, a system where the consumer could simply go to the store and ask questions, see if the person is nice, helpful, answers your questions. That’s where you need to create trust so that consumers will decide to go shop outside of their own borders,” stressed Nicolas Godfroy, Head of legal department, UFC Que Choisir.

The European Commission plan is already on track to help Jean Daniel and his customers do more business together.
It aims to develop infrastructures, ease access for web users to goods and services online and tackle legal issues such as fiscal, copyright or geo-blocking obstacles.

Andrus Ansip is the European Commission Vice President of the Digital Single Market.

Maithreyi Seetharaman: “Let me start off by asking what’s going to be key to do in 2016.”

Andrus Ansip: “We launched this Digital Single Market strategy last May already and I would like to say we are in a terrible hurry already. We made proposal about allowing portability of digital content in the European Union.

‘Second proposal we made was about digital contract. Today we can have potentially even 56 different types of rules dealing with online sales and digital contracts. Instead we have to reach an agreement as soon as possible, and our aim is to reach this political consensus during the first half of this year and our aim is to allow portability when we will abolish roaming surcharges.”

Maithreyi Seetharaman: “For businesses a key concern is that their earnings and their revenues are going to be impacted.”

Andrus Ansip: “If somebody says ‘yes, you can buy this box of chocolates here, but it’s not allowed to eat those candies for example in Belgium’ – then you think those people, they’re crazy. But in digital meaning – they say this is basis of our business model. We don’t have to accept discrimination on basis of nationality or basis of where your credit card was issued on the 21st century- This year we will make another proposal. The aim of this proposal will be to improve cross border access to digital content for our citizens.”

Maithreyi Seetharaman: “When it comes to 28 countries, How feasible is it to implement all of this.”

Andrus Ansip: “It’s feasible. I hope it will be possible to find consensus all over the union on in meaning of those contract rules dealing with online sales. With VAT rules we have to make life more easier for our businesses. But I am quite sure different VAT rates – they will stay for quite a long period of time.”

This push for a digital single market brings up another issue.Almost half of us in Europe lack digital skills, while 90% of jobs in the future will need them. So we sent Denis Loctier off to tech mad Estonia to see how we can re-skill ourselves for the most seemingly un-digital of jobs!

Estonia might not be the richest of the EU countries, but when it comes to digital public services, it’s at the forefront. Estonian e-thinking is best symbolised by its electronic ID card which serves as a digital signature, allowing citizens to submit their taxes, sign contracts, vote or pay for their public transport – all electronically.

“Compared to the whole of the EU, Estonia is a relatively small market. Still, Estonian achievements – as well as its shortcomings – in the digital area provide a valuable study for the rest of Europe,” reported Denis Loctier.

The local healthcare system shows how well even the most traditional domains can move to digital. All the health records and prescriptions are electronic, so an emergency room can access all the patient’s medical details by his or her electronic ID number.

“All the analyses, all the CT scans, sonography, all the previous surgery that has been done – I mean, everything. A lot of old-fashioned doctors won’t be starting to use it, but the new, oncoming generation is definitely gonna use it,” explained Erast-Henri Noor General surgery resident, North Estonia Medical Centre.

“The doctor who is doing today quite simple data administration jobs must be freed of this activity, and we’re pushing those activities to nurses. Nurses’ activities – what they are doing today – we are pushing to medical administrator staff, and so on,” said Marko Kilk, IT Director, North Estonia Medical Centre.

So does the Digital Single Market kill or create jobs? Ain Aaviksoo, who is in charge of E-services at the Estonian Ministry of Social Affairs, believes that shifting of some work to less-qualified staff improves both efficiency and employment.

“Digital Single Market, by all means, creates jobs. It will shift away some of the jobs from some areas where mostly human labour has been used, and healthcare is one example, say, in hospitals – but it will create jobs in other areas, and it will also create jobs in the companies who will develop those products, which we can sell also outside of Europe.” he said.

The Estonian digital economy lags behind the EU average in electronic information sharing, RFID use and electronic commerce, with the Digital Single Market now holding the key.

Hospital IT departments worked with doctors to make mobile app to access all Estonians' medical records in seconds pic.twitter.com/QgJHIN9qK9

Maithreyi Seetharaman: “ DSM rings true for digital companies for many people – is this translatable to traditional companies and job creation or job losses as many are worried about.”

Andrus Ansip: “Yes, Sorry to say but in some sectors people, they will lose their jobs. Let’s take APPECONOMY. In 2014, there were only 1.8 million jobs in this industry in the European Union. According to some prognosis in the year 2018 there will be 4.8 million jobs. Progress will create more jobs than progress will destroy.”

Maithreyi Seetharaman: “Are we saying to international investors that Europe is going to be a tough place to do business?”

Andrus Ansip: “We don’t have different rules for ourselves and then for foreigners. And once again we have to ask of ourselves why our start ups, why for example Spotify, which was created in Sweden had to move out from the Union to the United States to scale up? We had to create digital single market in the European Union to keep our smart brains here in Europe.”