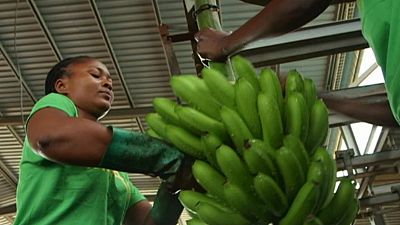 Bananas are turning into the ‘green gold’ of Angola.

The country is the second biggest oil producer Africa, but revenues have gone down by at least a third over the past two years alone due to falling prices. So the country has embarked on a process of economic diversification, and at the forefront, is agriculture.

In the 1970s Angola was the leading exporter of coffee, sisal, sugar cane and bananas. But all that was seriously damaged by its 27-year civil war that ended in 2002.

Now, in order to diversify its economy and achieve food security for its people, this large country, twice the size of France, is taking advantage of more than 58 million hectares of land for cultivation.

In 2011, Angola was a net importer of bananas. Three years later, it was producing 253,000 tonnes of bananas, ensuring self-sufficiency and becoming a net exporter in the process.

“We consider now that the banana is our ‘Green Gold’”, says João Mpilamosi, President of Caxito Rega, S.A. “Not only in terms of commercial value, but also in its nutritional value and the high return that it provides to families. Today, the volume of annual banana sales in this area alone, the irrigated perimeter of Caxito, is almost $100 million dollars. And today, the project is already exporting bananas to sub- Saharan Africa. The best example is the Democratic Republic of Congo where we exported 10 tonnes of bananas in October alone.”

The government provides training and funding for irrigation products, but the challenges are immense. Of Angola’s 24 million people, there are over two million small farmers. They provide 80 percent of basic food crop production, and much of the work is done by hand.

The government helps with transportation and distribution. The products are often found on the shelves of supermarkets where local production is promoted and affordable prices are on offer for the emerging middle class, even if half of Angolans still live on less than two dollars a day.

“Thirty-five percent of our sales today result from what is produced right here in Angola,” says João Pedro Santos – General Manager Kero Supermarkets. “There are already some domestic producers that are not only producing for the domestic market but also for the international market. Namely, we already export to the regional African market and there are also indicators that Angola can become an exporter not only for the African markets, but also for the entire world.”

The objective is to bring domestic standards up to the level of international health standards, as many African businesses are more used to an informal market.

Refriango is a company committed to world class standards. They produce bottled water, and soft drinks and employ 3,800 people

In August this year 11 million eggs were imported but were destroyed because they didn’t meet health standards. New quotas on imports including eggs were introduced in February, aimed not just at ensuring quality, but also encouraging local production.

“Before we consider ourselves producers, it is our responsibility to be consumers, says Elizabete Dias Dos Santos, Administrator at Diside Management. “And it is our concern here that we are dealing with public health. As both consumers and producers, in some way, we have to have the responsibility of informing our consumers that what is made in Angola is of high quality, has validity and is credible.”

It is credible. Yet, although Angola has made remarkable strides in the development of infrastructure over the past decade, it still has ongoing challenges over supply, logistics and transport that ultimately hinder the development of local industry. Angola’s economic potential is wide. The question now will Angola be able to sustainably transform its petroleum based economy into a diversified and competitive entrepreneurial economy?

The challenge of creating growth and development in Angola

Private investment, SMEs and agriculture: working towards a diverse economy for Angola