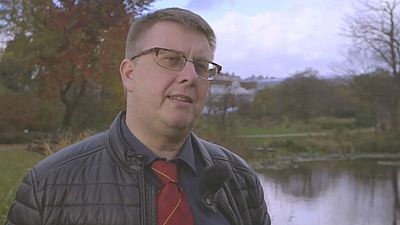 “It’s a good question whether the EU can do more in combatting the black economy because it’s actually a tax issue and normally tax issues are dealt with by the single and national member states, and mainly, it’s the different nations that will have to make their incentives in the right way. We often look to Sweden, they have a very generaous but also effective scheme of tax deductions which has been very succesful in bringing the black work down. And you also have to think that it is not very good for the entire national economy with the black work and a lot of DIY because it’s not a very productive way of producing. It’s best for the national economy if it is done by the skilled labor. So you’re not using your time properly if it’s yourself or some unskilled black worker that are doing this kind of things. And then in Sweden, it’s interesting they have this scheme of tax deductions both for cleaning services in private homes, and also for maintenance work, on buildings and private homes. And they have actually succeeded in a lot of their immigrants. They meet the Swedish labor market in the white economy instead of the black economy, which, i guess is very normal in Europe that immigrants, they often start their career in the labor market in the black economy, but in Sweden through this very generous schemes, you actually make it possible that a lot of immigrants can be employed in the white sector and that’s basically good, and we a little bit of the same in Denmark, but not as generous and as succesful as in Sweden.