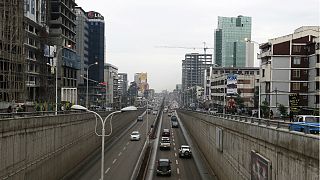 What will Africa look like in 50 years? To find out, African leaders have created the “Agenda 2063” to set up development objectives. One hard fact to take into account: Africa is urbanising. Today, on the continent, over 40% of the population lives in a city and local and municipal autorities are now de facto key players. Every three years, they meet to share experiences at the “Africités” summit. If the next edition will take place at the end of November in Johannesburg, a presentation was planned today in Paris.

When speaking about developpment in Africa, some think about growth rate or international trade. But for of the continent’s inhabitants, development means the state of the roads, access to a water fountain or the possibility to send their kids to school. “For us, development is local, or it simply isn’t,” says Jean-Pierre Elong Mbassi. Hailing from Cameroon, he is the secretary general of “United Cities and Local Governments of Africa”, which organise the “Africités” summit. Its principles: “shape the future of Africa from the bottom up with local authorities.”

This message is not always perceived well by decision-makers. Some are still wary of working with anyone but national governments. Despite this, the decentralising process has started, and the mayors of African cities now have significant weight to negociate on issues such as transport, housing, health, energy, etc. on their territory. These increased responsabilities are, however, not necessarily matched with an increase in human or financial resources to deliver. The head of the Senegal mayors association noted in 2012 during the previous “Africités” summit in 2012 that “for many local elected officials, this transfer of powers turned into a transfer of problems.”

So, the best way to face these problems is to talk about them. That’s the interest of “Africités”, as it is “a huge market of experience exchanges on very concrete issues” according to Elong Mbassi. With more than 1500 local elected officials, “it’s the largest democratic meeting in Arica,” underlines Gustave Massiah, an economist and a member of the organising commitee.