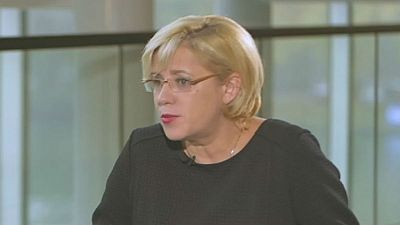 “First of all we have this history, European history with gaps and as I said regional policy it was designed to close this gaps, to close the inequalities that we have. We have scars on the map of Europe. And it is Regional policy is about people, its about improving the lives of the people and as you said – we have high developed regions but also we have regions that are lagging behind. And we have now a study, because we have regions where we invest a lot but we don’t see any economic growth or in terms of jobs some results – in others we see results very clearly. So we would like to know, I would like to know and I spoke with the people from European Commission to see why some regions, no matter how much we (stumbles) give money for investments, they are not developing themselves. But there is not any European region, which is not benefit from European Money. Being from Netherlands, to Germany, to France..I was in Berlin for instance and I was so much proud of how they deal with refugees, with integrating people I was in the (stumbles) suburb and the regeneration of the urban areas, also in Paris – so I very much encourage all the member states to use our funds for these kinds of prob…projects and also its now (stumbles) a challenge for some countries which never had such situation. For instance I (stumbles) seeing that Slovenia which is a small country with a big surprise – they are dealing wonderful these days with this crisis, exceptional situation. And I think it is very important to let, to let all the population – the 500 million people to say that we are not alone – we are together – we have to work together – we have to be united – we have to find solutions – because we are very strong and we need to be strong.”