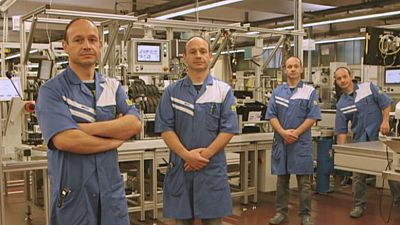 This week the Real Economy takes a look at the European Growth Story – is it reliable? And is it back for good?

Those questions and more as well as a closer analysis of growth are put to the European Commissioner for Economic Affairs – Pierre Moscovici. Euronews traveled to Poland to see what kind of signs our industry is giving us for the future – and then we jetted off to Germany to talk to the Central Bank of Europe’s biggest exporter about the potential risks to a feel good story that is just beginning.

One growth indicator is our employment and that’s steadily improving – 9.5% in Europe and 11% in the Eurozone. In most countries – the unemployment rate is falling with the biggest drops witnessed in Slovakia, Spain & Ireland. It has only risen in four countries. And that’s just one indicator.

The signs of growth are finally here. But just like in the first laps of a race – caution, strategy and sometimes difficulties can put competitors at different speeds.

GDP, the speed gauge for our countries is up in both the Eurozone area and the EU compared to last year except in France where it is stable.

Racing into the highest growth category – Latvia, Malta, the Czech Republic and Spain.

The other indicators that get our race cars running are showing strong performances too.

Household consumption is rising. What we export is up and what we import is also growing.

So, maybe the race still has many laps to go – but it is off to a slow but steady start!

Another indicator is, how our industry is doing for which we use the industrial production index. This identifies turning points in economic development quite early by reflecting how much value is being added in different industries. This index is now showing signs of life – some strong while others are slowly improving.

Euronews’ Monica Pinna travelled to Poland where both were highlighted.

Industry is the backbone of Europe’s economy. It produces 80% of Europe’s exports, and those exports are driving our recovery. In Poland for example – one of Europe’s emerging economies – GDP is growing at rates above 3% and industrial production growth is expected to be 5.5% in 2015. To understand what’s driving this, Real Economy decided to get the perspective of one of Poland’s leading companies, the main national supplier of city buses and a key exporter in Europe.

“Our sales in the last number of years have not witnessed a big drop. It was possible due to our presence in many countries in many markets in Europe, and not only in Europe. In the markets where there was a drop, we were looking for the customers looking for a special product (a niche product),” explained Solaris CEO, Dariusz Michalak.

Companies like Solaris are key to the European economy, as the automotive industry provides jobs for 12 million people in Europe and accounts for 4% of the EU’s GDP.

“The evolution of industrial production indicates that Europe has started growing again, but also that this growth is happening at different speeds in different countries,” explained euronews’ Monica Pinna

Some countries like France, the Netherlands, and Estonia show negative industrial production)_index_overview, while EU emerging markets in particular, like Poland and the Czech Republic, are growing.

What track is growth following in the 28 member states compared to the Eurozone? We posed the question to Tadeusz Kowalski, Professor at the Poznan University of Economics and Business, while taking a tour of the city.

“Countries like Hungary, the Czech Republic and Poland are still much less developed than the core European countries. The pace of catching up is pretty fast, but we have to be realistic. I think we need at least two decades to reach the productivity levels of the average GDP per head for the developed areas of Europe,” detailed Kowalski.

About half the sectors in the Eurozone are still in recession. In Central Europe all sectors are expanding, although the stages differ from sector to sector.

Joining the Real Economy’s Maithreyi Seetharaman in the studio was European Commissioner for Economic and Financial Affairs, Pierre Moscovici. Different parts of Europe are really firing at different cylinders – does that bring the veracity of the recovery in your eyes into question?

Moscovici: “No, Europe is now in a clear sound robust recovery. The problem is that this recovery is at first – sluggish. And second, unequal. It is unequal between the Eurozone and non euro area member states.”

euronews: “Why do you think there is a difference?”

Moscovici: “The Euro area had to adapt more during the crisis because the rules are tighter.When you look at the growth forecast that was last delivered a few months ago, we are going to deliver the next ones at the beginning of November – the gap is only 0.2% or 0.3% – and it was double in the last number of years.”

euronews: “A lot of the growth initiatives were also towards the Eurozone as you rightly said – The ECB’s quantitative easing being one of them. What happens if the ECB has to pull back?”

Moscovici: “I am confident that the quantitative easing programme will last as long as necessary so I am not worried about any kind of interruption but monetary policy is not everything. We need to have a multi-function policy first, fiscal consolidation has to continue. Secondly, it’s about structural reforms, third is investment and fourth is monetary policy. If we’ve got those 4 pillars then we have strong assets for growth.”

euronews: “What’s the back up plan if that attitude has to change?”

Moscovici: “I was never the ‘What If’ guy. The ECB is there for long lasting policy. Some fears must be based on risks – but there is no risk there. It’s not because the recovery is there that we need to slow down the reforms especially the labour market. It is not only about the pensions system.”

euronews: “Are there any countries in particular you think are lagging behind and are causing that internal threat to be higher?”

Moscovici: “No, I am not going to pin-point one country or another. But we know which country needs more efforts, there’s no doubt about that. I know some of them.
And the second risk is about investment – we need more investment in Europe. How can we be more innovative and competitive economies in the world in a decade? Even if emerging market countries are now suffering we are not capable of investing.”

euronews: “Commissioner, Real Economy headed to Germany, Europe’s biggest exporter, and euronews’ Guillaume Desjardins took a look at the barometer of the external threats to this very fragile growth story. That threat could come from the slowdown we are seeing in the Chinese economy amongst many other emerging markets.”

Rainer Hundsdörfer is a man who knows something about making the parts that make your machines stay cool and exports them around the the globe. The company he runs had only 35 employees when it started and today, that number has jumped to more than 12 000 people selling Deutsche Qualität in every corner of the globe.

“EBM Papst sells 75 percent of its products outside of Germany. Italy and France are growing rapidly, Germany is good, or let’s say “okay” while North America is fine, China is slowing down but still growing. The rest of Asia is doing quite well,” explained Hundsdörfer.

All these exports mean more jobs in Europe but recently the Chinese economy has slowed down. And the worry is what happens if consumer demand there slows down even more? Another problem could be oil exporting countries like Russia and Brazil whose economies have been hit by a 57 percent fall in oil prices over the past 16 months.

And the wheel could slow down even more for Brazil, Russia, India, China, and South Africa, better known as BRICS.

“China, Russia and Brazil. Altogether, they represent 18 percent of Europe’s exports. But if the BRICS, as they’re called, stop buying our products, who will we sell them to?,” asks euronews’ Desjardin.

Germany’s central bank, is not worried yet and believes the troubles in emerging markets will not hurt Europe’s recovery.

Jens Ulbrich, the Chief Econonmist at the Deutsche Bundesbank: “With regards to domestic factors, we have low energy prices, nearly zero inflation and that provides a real stimulus to real incomes and real wages and then we have double digit investment rates in some countries in machinery for example, in Portugal, in Spain and in Ireland. Our companies in specific sectors will feel a slow down in China much more than companies in other sectors. For example, 6 percent of all German exports go to China, but with regards to the car industry, it’s 10 percent of the exports. And if there are companies that have not diversified well in foreign markets they will feel a slowdown in China more than other companies.”

The Bundesbank has done its homework and believes the BRICS will see a decline in growth, but not that it would lead to a recession.

“This would lead to a reduction in the growth rate in the euro area of 0,2 percentage points," believes Ulbrich. “This is not that much. What of course can also come along with the more severe slowdown is uncertainty and volatility on financial markets.”

That strategy ties in with the Bundesbank’s opinion that China will remain an important partner, despite the risks increasing.

euronews: “Does China worry you? Are we too dependent?”

Moscovici: “I would say of course China is in a period of transition. In our forecast for 2015 I see no effect and in 2016 probably China will be mentioned as a downside risk but it won’t be of high importance. And we feel that the global economy needs to watch China, that there needs to be structural reforms there – they need to communicate better. But it is no worry for the European economy I would say globally.”

euronews: “What does our position look like with Russia going forward?”

Moscovici: “Russia is entering into a deep recession and of course needs structural reforms. It is preferable for Russia and for the world that the reforms are made – this economy is stronger. I would prefer that but I see little vulnerability for Europe. Our problems are mostly internal. Our problem for Europe is to develop the drivers for a stronger economy. The problem is that our potential growth for the next decade – if we don’t change those drivers is at 1% per year – its solid, but is that enough? No, its just not enough! We need to trade more. Free Trade – if the agreements are well negotiated. I am concerned about problems which are not related to the economy but are linked to growth – the rise of nationalism, xenophobia and the fear of a lot of Europeans that Europe is no longer a solution but instead the problem – I want Europe to be the solution.”

euronews: “Commissioner, on that note thank you very much for your time.”