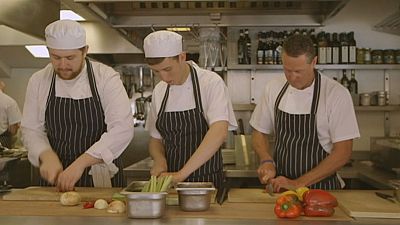 Europe’s population is ageing and fewer young people means a shrinking workforce in the future to support it. People will have to work longer, hard and more productively.

So what will the picture look like now and in ten years time, with skills demand and supply strongly influenced by growth, age and regional differences?

To answer let’s imagine Maria, Mark And George, who are among Europe’s unemployed millions.

Almost half of all employers complain that people like them don’t have the right skills, meaning bosses have millions of vacancies.

With Mark and George having low or no digital skills they risk unemployment, since by 2020 — 90% of all jobs will need some digital skill.

By 2025 the majority of jobs will need high qualifications. Maria will have a career as she has a masters degree in biotechnology.

Mark is a trained plumber, medium level qualifications like his will account for a large part of the job openings. George left school early, like five million other Europeans, 40% of whom are unemployed today. By 2025, they risk becoming long term unemployed as only a few jobs will be available for them.

At the height of the crisis more than 12 million Europeans were out of a job for more than a year. This group was mostly made up of men, some of whom were highly qualified. To get these long-term unemployed Europeans back into work there are of course projects and money coming from the European Social Fund and the European Regional Fund. But to really open the course to the labour market for those who may have potentially given up, it takes not just government push but also private sector initiatives.

The experience of Ronan Cunninghham in Ireland is a perfect example. They 34-year-old businessman from Co. Dublin graduated in law and worked for several years before the recession hit and he lost his job.

Ronan was out of work for two years. “I did not really know where to turn at that point, he says. “I was in a limbo, I had built up a bit of experience in small legal practice, but I wasn’t fully qualified. I came across the Innovation Academy. I looked into that course, and I applied for it, and thankfully I got accepted.”

He took a six-months course under Springboard, a public initiative that has trained 30,000 people since 2011 in the skills needed now and in the future. The course helped Ronan set up 2 years ago a company that promotes footgolf, a fast-growing sport in Ireland.

“I managed to find this golf course so it was all about opening as fast as I possibly could.” Ronan says.

Thanks to this training he was able to turn to entrepreneurship to find a new job. But it takes governments and companies playing together to help the unemployed to stay in the game.

For their part companies sometimes invest heavily in career consultants to help staff transition to other internal posts are even to elsewhere in the jobs market. In Paris Real Economy met one such expert in skills and employment guidance.

“More and more people have to go through training to find a job again because the labour market is changing, jobs are changing so they definitely must have their skills updated,” said Evelyne Catherineau.

“We are now seeing a greater need for internal mobility from companies, because they want to motivate their employees to stay within the company, rather than requiring them to leave the company.”

Such initiatives help those who have lost their job or are at risk of being unemployed, by integrating them into careers with growth potential.

According to the latest forecasts, the skills most needed in Europe will be those of professional services, and service industries. Job opportunities will vary from country to country, relative to their workforce size. So in a country where 1 out of 10 people are unemployed, Ronan’s story is an inspiration to re-skill.

“Since we launched, I managed to employ 5 people. On top of that I’m earning a good living myself, and hopefully I’ll able to continue employing people, in the years to come,” Ronan says.

For a broader perspective on the skills/jobs issue in Europe Maithreyi Seetharaman spoke to European Commissioner for Employment, Social Affairs and Inclusion Marianne Thyssen.

Maithreyi Seetharaman
“Commissioner, what is the real picture in Europe – Do we have lack of skills? Or is it that the jobs market has completely changed?”

Commissioner Thyssen
“It’s a little bit of everything. We see that more than 2 million vacancies are not filled and this is for a big part due to a lack of skills we cannot take a picture of the whole European Union at once – Its not one size fits all. If you go for instance to the region of Toulouse where you have an aerospace valley you need other skills than when you go to the city of London where there is a big focus on, on the financial sector what is important is that the education route and the employers route are sitting together to look what we need for the future –they can learn a lot from each other than just to live in separate worlds.”

Maithreyi Seetharaman “If they need to talk to each other, structural reforms are needed in many of the countries. What is realistically possible?”

Commissioner Thyssen
“We ask and we demand to have a modern social protection system and this means that you have to protect and support people but also to enable them – to help the long term unemployed –we do that very concretely with proposals to the member states, to say first do a personal evaluation of all these persons. What is the potential and where are the problems? What are the barriers to come back to the labor market? Is it a matter of skills or are there other problems? Then we propose to make a kind of contract about it – from the one side they are offered a package, from the other side they have also a commitment that they have follow that path. What is very important is that long term unemployed people are registered.. before they lose their motivation to go back to school, to accept again a training path and so on.”

The Youth Guarantee, the six billion euro Youth Employment Initiative target the skills gap. But, do these programmes and apprenticeships really get young people into jobs and start them on long-term careers? Real Economy went to the restaurant programme ‘Fifteen; in the UK to find out.

In the southwestern corner of the UK, Fifteen Cornwall is not only an acclaimed restaurant, but also a social enterprise that every year offers disadvantaged, unemployed 16 to 24-year olds the opportunity to train as chefs.

“I’ve seen over 100 apprentices going through our programme, 80% of them are still cheffing, says Karl Jones, Fifteen’s Training and Development Chef. “Even the guys who didn’t complete our courses still go on, many of them into other restaurants and hotels within our industry”.

The EU youth unemployment rate is more than double the overall unemployment rate. 11% of those aged 18-24 are early school leavers. That’s why Europe is enhancing the development of high quality apprenticeship and traineeship programmes in line with the job market’s needs and aimed equipping young people with the right skills for a long-term career.

Inspired by celebrity chef Jamie Oliver, Fifteen Cornwall is an internationally recognized programme that the European Union would like to see replicated, as today not all apprenticeships are such high quality.

The project was initially set up through the European Social Fund and European Regional Development Fund. It has received 2.5 million euros since 2006, in addition to UK government support.

These instruments complement the Youth Employment Initiative that was launched in 2102 to support young people aged under 25 living in regions where youth unemployment was higher than 25%. Apprenticeship funds made a big difference to Jack. from apprentice at Fifteen to Junior Sous-chef and trainer:

Jack Bristow, Fifteen Cornwall Graduate, Junior Sous-Chef
“Vocational employment is much easier for someone like myself,” says Jack Bristow, Fifteen Cornwall graduate and junior sous-chef . “I’m not too academically bright… I’ve been to college and I was going to do the whole university approach but it wasn’t for me. It’s been a big stepping stone so it let me jump ahead in my career by quite a few years.”

Projects like Fifteen not only have a huge social impact, the enterprise invests almost a million euros per year back into the local economy through its close-to-home sourcing policy.

So how has the debate about young people and jobs and skills changed since the financial crisis? Maithreyi Seetharaman put that question to Commissioner Thyssen.

Commissioner Thyssen
“We still see the consequences of the crisis and it means that we don’t have enough jobs there are many jobs that have been destroyed When we look at the conversation young people and the demands of the employers, what we see is that because there are not enough jobs yet,– that demands of course are often high – the requirements of the employers, but that on the other side we see that many people when they don’t find, let me say the job of their life –– they accept lower levels of employment so there we see a problem., specifically for young people that because of the crisis – they had no chance to have a work experience this is why we are so keen on promoting the system of apprenticeships . Because it gives young people the first, often the first work experience that they need

Commissioner Thyssen:
“We have to be careful there. When you see that young people stay in precarious contracts, short term contracts – only this one after another – then you can say this is not the right way. We have to accept this precarious work situation but, as a certain phase in a path to a better job opportunity and this is why we say – Be careful – don’t accept a labour market where you see young people in precarious situations and the older one still in the good protected situations.

What we are developing, next year, in our skills agenda is that we are going to have a look what are the skills that we expect to be needed and this is regionally diversified, its not one size fits all. Secondly we want to have a better system of the recognition of qualifications.”

The Innovation Academy: "I'm creating a new extension to my network of contacts"

The Innovation Academy: "Employers are looking at the academic credentials"