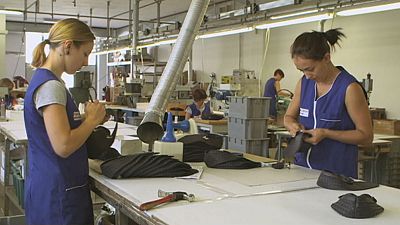 Small and medium businesses (SMEs) are the heart of Europe’s economy but some have not survived the financial crisis and many others have had to innovate to have any kind of a future. Real Economy travelled to Italy to meet some of those who have risen to that challenge, often tapping into new sources of financing when lending from the banking sector was drying up.

There are some 21 million SMEs in Europe, supplying about 85% of jobs. All that entrepreneurship allows Europe to control one fifth of world trade and that’s why it’s so important to understand these economic powerhouses and why they are so critical.

It works something like this: Jack has a micro-sized glass making company, which employs less than 10 people and makes around two million euros a year. Jack then supplies his glass to Greg’s small company which makes mosaics – Greg has earnings of less than 10 million and fewer than 50 employees. Greg then sells his mosaics to Linda who is a medium-sized mosaic and tile seller. She has 250 people or less on her payroll and her business makes 50 million euros.

However, if any of them are taken over, linked to or partnered with a large company, or are 50% owned by universities or local authorities they may no longer be considered SMEs. Jack, Greg, Linda and others like them create 2 out of every 3 jobs in Europe. Companies like theirs make up 9 out of 10 businesses in Europe, creating the value added that drives our growth.

Italy is mostly made up of micro enterprises, employing almost 86% of all Italians. Hiring both before and after the crisis really slowed down, because the value firms add – which means the value of the goods and services they produce in a region, or an industry – was lower than before the crisis.

Business confidence is up but the recovery is sporadic across Italy. But there is a new energy now among European SMEs to innovate and smart specialise in order to grow.

The Marche region is famous for it’s ‘made in Italy’ shoes, and the local economy consists mostly of SMEs. Thousands of companies operate here in the footwear sector, employing over 28,000 people, representing around 28% of the national total.

An orthopedic shoe factory near Ancona visited by Real Economy has managed to step over the economic crisis through smart specialisation.

The head of made-to-measure department at Duna, Sara Rosiglioni, says investment and innovation were key: “What we did was we tried to invest in the product, with even more technology and ongoing research. We tried to create a product that didn’t exist in the market and we focused on extreme personalisation.”

The speed and the quality of this customised production has been boosted by digitalisation. Engineers are constantly designing new software to improve data collection to create customised fits. The old-fashioned measurements and moulds have been replaced with a 3D scanner.

“Research allows us to innovate production processes, transforming an artisan company like ours into an industry,” said Raffaele Leluzzi a biomedic engineer at the firm.

A myriad of micro companies support the footware industry in the region. In Serra De’ Conti, an hour’s drive from Ancona, Francesco Marano’s business produces soles for Duna. To survive the crisis – a micro company like his, had to adapt its operations:

The crisis hit my company hard, reducing sales,” Marano says. “In the past I had up to two million euros in income and today we have between 500,000-600,000 euros per year. So I can’t say I’m out of the crisis yet. Before, we used to do all the production internally, but now we outsource part of it to small external workshops”.

To encourage that innovation, Europe’s SME’s can now also tap into a dedicated 57 billion euro EU Regional Fund until 2020. This SME enterprise attitude is what will allow Francesco to launch his own shoes in the market soon!

The road to recovery

For more on the importance of innovatio for SMEs Maithreyi Seetharaman spoke to the Co-CEO of the Marcegaglia group and President of Business Europe, Emma Marcegaglia.

Maithreyi Seetharaman: “Over the last couple of years have you seen SMEs really change in their strategy? Are they becoming more innovative and more smart?”

Emma Marcegaglia: “When the crisis was so big – the attitude was more – how can I survive? The recovery is arriving. I see at least a part of the small medium enterprises the attitude to change and to innovate.

Maithreyi Seetharaman: “Does everybody have to go into Smart Specialization?

Emma Marcegaglia: “I don’t see this division between very high technology companies and very traditional ones. It’s not a question of sector. It’s a question that in each sector each company has to find its way to be more innovative, more creative and also to make more research.”

Accessing financing has long been a major challenge for SMEs, but it became hugely difficult during the crisis. So what do you do when banks now lend less? Many businesses are now turning to funding sources outside traditional banking when the need arises.

Massimo Deandreis, General Manager SRM, Intesa Sanpaolo Banking Group says debt levels are a major issue for Italian firms: “The leverage of Italian SMEs is higher than in other European countries. It’s 45% in Italy, while it’s around 19% in France and Germany. The credit usually comes from the banks, it represents 69% of the whole financing sources”.

So some SMEs topped up their finances with things like mini bonds, in which small companies borrow money from small investors. Or they got private equity investors or business angels to take a slice of the pie.

That experience is replicated in other European countries. At a European level, policy is now being shaped to make access to such financing easier. But what about on the ground? Real Economy asked Dario Scannapieco, the Vice-President of the European Investment Bank, which just last year lent some 290,000 European SMEs the money they needed for their business.

“One of the challenges for Europe in this moment is to bring in investors to finance the real economy:” said Scannapieco. “We know that there’s an abundance of liquidity and the important thing is that this liquidity is directed to productive investments. We need well-established rules. Private investors want to know, for example, when infrastructure is made, what is the schedule and what are the costs. This is why it’s very important that states adopt structural reforms that can give this kind of certainty”.

Emma Marcegaglia: “There is a problem of culture still there… Some family owned companies don’t want to open their company to new investors. But I think we have to take this kind of street we have to help also small and medium enterprises to understand that you cannot live only with bank loans. You have to open yourself to equity, to investors, to business angels. So, we are not really there because if you compare Europe with the US you still see a big gap. We have to make small and medium enterprises understand, but also big enterprises to understand that this is the way to do it. There is still a regulatory gap. In Europe you have a lot of bureaucracy, so we have to change this.

Maithreyi Seetharaman: “We know there’s a focus on investment. Are we that attractive as a market and where are we lacking?”

Emma Marcegaglia: “Maybe some months ago a lot of people would say no. Europe is not so interested. Now you see that the old Europe has a lot of problems but it’s more solid if you compare it with the BRICs – Russia, China, India, Brazil. We have a solid base. If you look at what’s going on in the world – you understand that Europe is still place where you can invest. On the government as we said, you need rules which are clear,solid. But also on a business point of view – maybe you have to be more transparent, more open.

Maithreyi Seetharaman: “Do you think there is now too much reliance outside of the banking circle, so we have to rely on the private investors to get business going?”

Emma Marcegaglia: With the new rules – Basel 2, Basel 3. I think it would be more difficult for the banks to make loans to very small and medium enterprises. So I think the access to equity, the access to capital markets will become needed – so we have to prepare ourselves for this change.