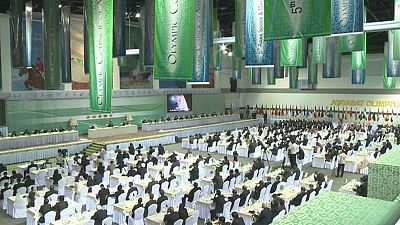 It is the city where every building is white, the capital of Turkmenistan, Ashgabat, where the 34th Olympic Council of Asia, (OCA), General Assembly was held with the participation of 45 Asian member countries’ Olympic committees. Why this event is so important? The reelected president of the OCA says it is all about providing facilities for Asia’s world-class athletes.

Our goal is much bigger. We'd like to hold the Asian Games and to take part in international competitions

“When you go to the medal list you will find a lot of Asians there. More than 50 to 60 percent of Asian National Olympic Committee members won a medal at the London Olympic games, and we are looking to increase this number in 2016 in Rio,” said the OCA President Ahmad al-Fahad al-Sabah.

Electing the president of OCA was just one among several major decisions taken in Ashgabat. The General Assembly awarded the 2022 Asian Games to the only candidate, the more than 2000-year-old Chinese city, Hangzhou.

“I was very excited that we attained our goal to host the games. This is a huge seal of approval for our citizens who supported this project and an encouragement to the organizers. Hosting the games will be beneficial for our economy and culture too,” said Hangzou’s Mayor, Zhang Hongming.

Also earlier than 2022 Asia will host some major events. After 2016 the two following Olympics will be held in Asia, the 2018 winter games in South Korea, and the 2020 summer ones in Tokyo.

Additionally there will be special Asian events on the continent too, the 2016 Asian Beach Games in DaNang, Vietnam, the 2017 Asian Winter Games in Sapporo, and the next Asian Games in Jakarta, Indonesia, 2018.

As for the host city of the General Assembly itself, Ashgabat is preparing to host the 5th Asian Indoor and Martial Arts Games, (AIMAG), in 2017, when more than 5,000 athletes from 62 countries will compete across 21 sports.

“This is the first time in AIMAG’s history that 17 countries of Oceania will participate. This gives us a big responsibility to host the games, with the support of our government, at the highest possible level. We hope we will suit the requirements,” said AIMAG’s Executive Committee Chairman Dayanch Gulgeldiyev.

To meet their targets Turkmenistan began constructing an amazing Olympic Complex in Ashgabat in 2010. It has to be completed by March 2017. But AIMAG will not be the Olympic Complex’s only event..

“Our goal is much bigger. We’d like to hold the Asian Games and to take part in international competitions, and by holding indoor games we’d like to boost sports development and to inspire people and sportsmen,” says AIMAG Executive Committee member Bayram Saparmuradov.

Constructors are regularly beating deadlines. The first phase of the whole project was finished last April, so there are facilities already available for high-level competitions today. The second phase deadline is the end of this year.

Turkmenistan’s most popular sports stars are eager to compete in front of their own fans.

“My aim is to win at AIMAG 2017, and to lift the Turkmen flag as high as possible,” says Sambo World Champion Gulbadam Babamuradova.

Who knows if her dreams will come true? But Ashgabat’s dreams for the 5th AIMAG are becoming very real.

“Seeing the facilities there is no doubt Asian sport is improving fast. Of course there are things where progress needs to be made,” reports euronews’ Péter Kristóf.

For the OCA’s president getting young people involved and applying the newest technologies to organize Asian sport is inevitable.

“I think, youth and technology and the organisation of our games will be our main target in the next four years,” says Ahmad Al-Fahad Al-Sabah.