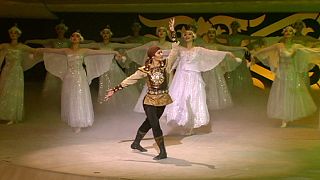 Kazakhstan is celebrating its ancient roots with around 100 events across the country marking the @550th anniversary of the Kazakh khanate”:http://e-history.kz/en/project/index/3.

You can never kill the spirit of a people. You can't kill the mentality, the culture. All that runs through all the political difficulties, crises, dramas, wars.

Founded by Genghis Khan’s descendants in the 15th century, the Khanate was the first separate state of the Kazakhs – a Turkic-speaking, formerly nomadic people inhabiting the vast Eurasian steppe plains. The Kazakh khanate existed until the 18th century, when it broke into three parts that were subsequently incorporated into the Russian Empire.

A special exhibition at the National Museum presents archeological artefacts, ancient texts and folklore that shape the roots of Kazakh national identity, eclipsed by the Soviet ideology in the 20th century.

These ideas were discussed by an international forum of historians and other experts in Astana.

“The disintegration of the Soviet empire propelled every ethnic group that had been part of it towards self-determination – including the Kazakhs. That’s why, for the last 20 years, we’ve been vigorously searching for our historic foundations,” said Prof Zhambyl Artykbayev of Gumilyov Eurasian National University, Kazakhstan, one of the academics taking part.

Local and foreign scientists have studied the ways in which the history of this country was influenced by its origin as a vast land-locked steppe at the crossroads of regional economies and cultures.

“I think that Kazakhstan, more than any other country in Central Asia or even Eurasia, has fulfilled the destiny written on the most ancient pages of its history,” commented Ermanno Visintainer, a ‘turkologist’ and head of the Vox Populi research centre in Italy

Catherine Poujol, head of the Centre for Russian and Eurasian Studies, INALCO in France said “There’s a kind of significant political drive in Kazakhstan today to show to its neigbhours that Kazakhstan wasn’t just born as a state 25 years ago.

Kazakhs reflect on the Soviet era as one that brought modernisation but also many national tragedies; from the devastating famine of the 1930s to four decades of nuclear tests that still affect the health of local citizens.

“You can never kill the spirit of a people. You can’t kill the mentality, the culture. All that runs through all the political difficulties, crises, dramas, wars,” added Poujol.

The anniversary celebrations will continue around Kazakhstan throughout the year.