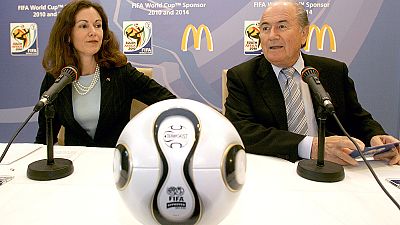 In this week’s edition of Business Line, we examine some of the cold, hard cash behind FIFA.

With its reputation at stake and its management in tatters, what else could football’s global governing body have to lose?

Its top sponsors, that’s who. From Coca-Cola to Gazprom, these companies are weighing up the risks and benefits of continued involvement in some of the most lucrative sponsorship deals in the world.

In our I.T. segment, we look at Apple’s plan to recapture some of its hold over how we consume music.

A decade ago it took downloads into the mainstream with iTunes. But the world has changed since then – and Apple knows you either adapt or die.

The company’s said to be finalising a new streaming music service to compete with the likes of Spotify.