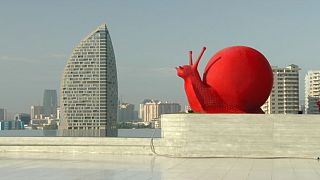 The third World Forum on Inter-cultural Dialogue was held over two days in Azerbaijan. Finding solutions to conflicts and problems, discussing relationships between different cultures and religions was the idea behind the gathering of opinion formers and religious leaders in Baku, the capital of Azerbaijan.

We are seeing more conflicts and they are changing and we become more intolerant. I think we have not paid enough attention to culture - our cultural heritage and cultural diversity.

The theme this year was “Culture and sustainable development in the post 2015 development agenda,” with a view to marking the World Day for Cultural Diversity for Dialogue and Development on May 21.

The World Forum, also known as the “Baku Process” was officially opened by the President of Azerbaijan.

“Today we have representatives here from over 100 countries. It is really very important that these people have come to Azerbaijan to share their opinion because there are a lot of conflicts in the world. Blood is being shed in these conflicts, battles are taking place in Europe and also in our region. In this case Azerbaijan is like a stable island in the region,” stressed the president.

Topping the agenda of the forum was the security problems facing the world and also the violence sparked by extremism.

“To have in the same room imams, rabbis, Gulf State representatives, people from countries at war who are not speaking to each other, that is already a good result. For a better future we need a better education. We have to have common values, but values which have to be really practiced.

“We have to get away from theory. I think it will be a long and hard journey. Because for the moment the world is not very safe and it is much more violent than it was 10 years ago,” opined French Senator, Nathalie Goulet

One of the names under discussion at the meetings was Boko Haram – the militant Islamist group fighting to overthrow the Nigerian government and create an Islamic state in West Africa.

“In my country Boko Haram represents a small little group of Muslims who are fanatical and terrorists. The rest of the Muslims in Nigeria are peace loving people. But there is that division there. If we don’t resolve it the internal divisions within each religion we cannot deal with the need for reconciliation across the board. We have the same problem with Christianity, we are not united,” explained John Onaiyekan, Roman Catholic Cardinal Archbishop of Abuja.

The World Forum for Inter-cultural Dialogue is a biennial event organised in partnership with UNESCO.

“The situation in the world today is really worrying. We are seeing more conflicts and they are changing and we become more intolerant. I think we have not paid enough attention to culture – our cultural heritage and cultural diversity.

“We have not paid enough attentionto education programmes. I think we have to change the content of school text books. We have to study more history. We have to know our own culture and that of other countries,” contended Irina Bokova, General Director UNESCO

The Forum looked to the future in its meetings in terms of ‘the big project’ and ‘the small project’, with the abiding theme that tolerance is possible.

“We share difference diversity and we have to learn how to live together without killing each other. That’s the hope. That’s the big project. The small project is to look at things that work so that we can live together,” concluded Paul Morris of UNESCO.