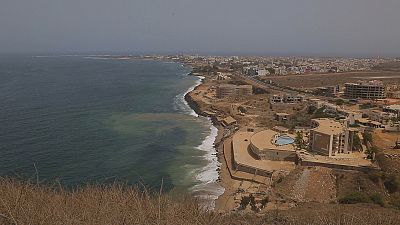 Senegal’s capital Dakar is showing off its new face, with a development boom. New infrastructure has been given a shot in the arm and in the past few months several projects have been completed. Senegal is determined to become an emerging country by 2035.

“The ambition is to turn Senegal into an African hub, notably for the Economic Community of West African States and its 300 million inhabitants. To do this the business climate needs to be further improved, procedures need to be simplified, and investors’ costs need to come down. Senegal needs to become even more competitive,” says euronews’ Serge Rombi.

A huge building site lies 30 kilometres south of Dakar. This will be the future urban growth pole of Diamniadio. It is a key element in the country’s development strategy.

The pole could create 30 to 40 000 jobs. The idea is to set up a vast industrial platform with services, universities, hospitals, offices and a new town on this more than 3000 hectare site.

“In three years there will be 3000 homes here for 15,000 inhabitants, along with shops and offices,” says Getran Group’s Project manager Delphine Gnancadja.

Diamniadio also has Dakar’s brand spanking new international conference centre, built in less than a year. Close by is the new Blaise Diagne airport, which should be finished next year. It will be linked to Dakar by an express rail link, and a motorway. The first 25-kilometre stretch has been open for two years.

It is West Africa’s first toll road, and was built in record time, just 44 months, by one of France’s biggest civil engineering groups in a novel public-private partnership. It is a system the Senegalese authorities want to encourage elsewhere.

“When you look at the map of Africa you see it is a 4 to 5 hour flight from Europe, 4-5 hours from the USA, 5 to 6 hours to South America and 6 or 7 hours from Asia. So it’s really a hub. Today Dakar is the entry hub to Africa,” says Eiffage’s Gérard Senac.

“Diamniadio Valley” as some are already calling it has started to attract the big multinationals. The world’s number five computer services group is already present in Morocco. Now its second African hub will be here.

“Why Senegal ? For me there are four advantages. Political stability, which is very important for investors, Senegal’s well-educated engineers, the good infrastructure and communications networks, and production costs, which are lower than most other countries,” says ATOS Project manager for Senegal Momadou Ndoye.

Senegal has also made efforts to upgrade its national grid and lower the price of electricity by diversifying its energy sources. For small and medium-sized companies, they now have
a “one stop shop” to get connected, which has cut waiting time in half. These are strong incentives, and the message is getting through.

“In the first quarter of 2015 we saw the highest level of new company startups for 15 years. Foreign investments coming in also grew by eight percent from 2013 to 2014,” says APIX boss Mountaga Sy.

Senegal is sending out a strong message to investors. For example, the government promises that if any investor has a commercial dispute on its territory it will be settled within 90 days, or the OECD standard.

Another sign that the reforms to improve the business climate are paying off is that Senegal has entered the top five of most-reforming nations according to the Doing Business. Illustration index, which notes the cost of accessing property have been greatly reduced.

“Two lead measures have been taken. Stamp duties have been slashed from 15% in 2012 to 5% today. The second is that buying property has been simplified. Again, thanks to a new “one stop shop” today it’s possible to have the deeds in your hand in 72 hours,” says the Tax Administration’s boss Ahmed Tidiane Ba.

Before euronews left Dakar we went to see a business school, ISM Dakar. It has become a top-notch establishment, which has educated 12,000 young students in the last 20 years from some 30 countries.

The students here create pilot companies, and many have taken advantage of Senegal’s opportunities. One student has gone on to set up a fruit and vegetable business based in rural areas. I

“Senegal’s rural areas have huge potential. We organised the women into Economic Interest Groups, helping them with packaging, labeling, and processing. They’ve developed beekeeping and poultry farming. We help them to commercialise and market their produce on our website,” says Khadidiatou Diop.

Senegal knows many challenges remain. But more than ever the country believes it has cards to play and is confident it can pursue its reforms to become a key player once and for all on the African continent.