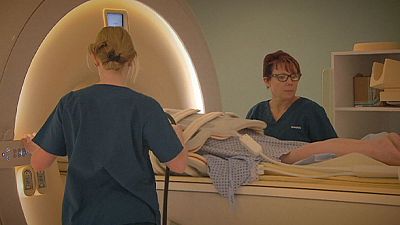 By 2050, 37 percent of the European population will be over 60 years old, presenting major new healthcare demands – and serious economic challenges as well.

The status quo in healthcare is no longer an option. If we want to continue with the health service in Europe that's of high quality, universally acceptable to everybody ... then we have to transform in a radical way.

“The status quo in healthcare is no longer an option. If we want to continue with health service in Europe that’s of high quality – universally acceptable to everybody on the same basis without care to be rationed – then we have to transform in a radical way the way (that) we provide services, how we intervene with patients at an earlier stage and how we empower citizens to take more control and manage their own health.”

The steering group has also already developed around 30 pilot projects in 21 countries.

After more than a year gathering data, the steering group presented a White Paper outlining its recommendations at a conference, entitled ‘Acting Together – a Roadmap for Sustainable Healthcare’, held on 19 March in Brussels.

Professor Walter Ricciardi, who worked on the White Paper, explained that Europe has a particularly old population, “especially in Italy and Germany.”

“For people with chronic diseases – that last many years and cannot be cured – we must reorganise services – not only hospital services, but also assistance on the territory and at home,” Ricciardi said.

Chronic disease is responsible for 86 percent of all deaths and affects more than 80 percent of people over 65. It costs an estimated 700 billion euro in healthcare spending each year.

Pascale Richetta, Vice President (Western Europe and Canada) at AbbVie, told euronews: “If I take the example of oncology, obviously oncology has moved from a very acute condition with very serious prognosis to – now for several of them – a chronic condition, but we can achieve this stage by early intervention.

Early intervention is at the core of a Madrid-based research project on muscoloskeletal diseases – the main cause of disabilities across all ages.

“We were able to cut by 40 percent the numbers of days off work of people with recent onset work disability, and the economical results were very good, because for each euro that you invest in the program, you get a return of 11 euros in a couple of years,” Jover said.

Promoting responsible lifestyles can have a big economic impact. Especially in countries like UK, where 67 percent of men and 57 percent of women are considered overweight or obese, according to British government data.

Professor Vincenzo Atella, Professor of Economics at the University of Rome, explained: “Healthier lifestyles can enable people to be less overweight when they reach the age of 50, allowing Europe to save up to 100 billion euros between now and 2050. And this is only through lifestyle changes – not taking into account medicine or other measures.”

Reorganising healthcare systems may be a necessity, but the EU Commissioner for Health, Vytenis Andriukaitis, warned of the danger of cost-cutting in the wrong areas.