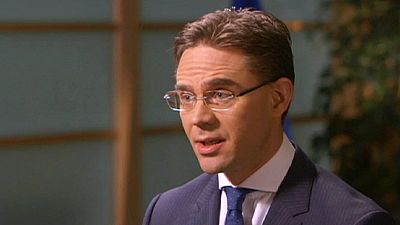 We’ve all at some point in the last couple of years debated with our friends and our family – the state of Europe’s economy, massive unemployment and what can be done about it. So, this week Real Economy went straight to the power hub of the new European Commission to find out what the plan is to turn things around.

On the show, we’ll be speaking with the European Commission’s Vice President Jyrki Katainen about the much debated Investment Plan. How realistic is it and how does he answer critics who question the ability to raise the money in Europe’s current state of affairs….and what does he have to say to the SMEs on the ground who desperately need the money to grow and to create jobs.

Now, the aim is to raise investment finance – that’s private money with no new public debt by selling bonds for investments for key growth projects while removing barriers. So, here’s our crash course on how exactly that plan is supposed to work.

Think of the EU Investment Package like a brand new empty Safe.
First into the safe is a €16 billion “guarantee” from the EU.which should be backed up by €8 billion of existing funds.
Another €5 billion will come from the European Investment Bank –
So that makes 21 billion euos from Europe in theory.. with possibly more from Member States and their Banks.
The Commission believes it can grown this €21 bn can into €315 bn…and this is how..
Every €1 of public funds should raise €3 in leverage as what’s known as subordinated debt. That means the EU ..will… as creditors… be the LAST to be paid back.
Private investors would then be incentivised to join the project, taking that €3 to €15.
As senior debt holders they would be THEFIRST creditors to be paid back.
If successful.. € 240bn should go to strategic investments and € 75 billion to SMEs.

Maithreyi Seetharaman: Joining us is Vice President of the European Commission Jyrki Katainen. The Investment plan has been on a roadshow…what kind of reaction have you got from the investment community and how realistic is it?

Jyrki Katainen: Well the feedback has been very encouraging, especially those who are supposed to invest in Europe have been very interested in, about the new opportunities we are offering. There are basically 3 elements – SME financing and high risk project financing, the second part is transparent project pipeline, and the third one is deepening of single market in various areas.

MS: How quickly will you end up having to knock on the doors of other countries, other parts of the world

JK: we can deliver very fast. So everything should be in place by the end of June. And we can start increasing SME lending already before that. once everything is ready – I’m more than happy to visit different part of the world and tell the other people also about the new opportunities.

MS: Since we are talking about the Real Economy, I want to get us down to the ground. To the SMEs that are supposed to benefit and the private investment side.. Guillaume Desjardin went down to Spain to get a perspective.

Meet Wilbur..he’s just one of the 7,000 pigs that Josu Garaialde’s company Basatxerri turns into world famous Basque hams every year.
Set up 15 years ago, with 14 employees – growing demand is not a problem for the company..its access to finance to allow that growth..

“We have to find new ways of direct marketing, integrate ourselves in restaurant chains and butcher shops, look for new products and new markets. If we had available finance, we would certainly get the opportunity to grow further”

Like Josu’s hams…for more than 20 million SMEs in Europe, access to finance has become a difficult road to walk….
High unemployment in Spain has made the story here even more critical. 2.25 million SMEs employ more than 7.6 million people.
Those numbers pushed the Basque government along with other public sector organisations to set up The Technology Park long before the crisis..
Here companies get together for synergies and loans.

“The problem is – says José Miguel Corres, Chairman of the Basque Country Technology Park – that during their normal business activity they are too small to gain access to business loans, to the finance they need.”

In order to help Josu promote his company, the EC and its investment plan, would need to make this ‘one euro into 15’ principle work. But are investors ready to be involved ? Can they help multiply loaves to feed the multitude of hungry SMEs ? In a word, can it work ? This are questions asked Pedro Sanchez, in charge of the Basque region for Banco Sabadell.

“Today there’s liquidity in the market, what investors expect are feasible projects to invest in. Therefore, for SME’s with a high level of risk – like start-ups or new enterprise projects – if the risk guarantee is mitigated, there’ll be a lot of investors ready to invest, me among them”.

“I think it’s ambitious – says José Miguel Corres -. Yes the banking system has money, but what is lacking now is confidence.”

That lack of confidence is being addressed in some part, by the European Central Bank’s QE programme, which basically injects money into the economy.
The effect? In theory, banks can take more risk..give money to SMEs like Josu’s..making him as content with growth, as Wilbur is in mud.

Maithreyi Seetharaman: This is about investor confidence, this is about people having confidence in the Euro, in Europe – Do you think it is there enough..to raise the kind of money you want to?

Jyrki Katainen: The situation varies from country to country. also next year, the growth will be even better around 2%, both in Euro area and in entire EU area. But of course, member states must do their share and they have to keep going in reform path Because this is very much needed in order to boost investment.

MS: Do you think the ECB’s quantitative easing program is making easier for you to sell the investment plan?

JK : It has been very helpful and it has stabilized the situation. If looking at the monetary policy and if you add Cheap Euro and if you add Cheap oil price, they all together create a tremendous stimulus, to the Euro area economy.. its up to the governments to do reforms
– If looking at Italy for instance..they have a very ambitious reform plan. Also, Spain, Portugal, Ireland..they are extremely good examples that when reforming a society you can get more jobs.

MS: I think a lot of people are very concerned about the vagueness of the situation. What gets sacrificed in terms of the funding that already exists? And specifics on the projects if you have any?

JK: we don’t know the projects yet. It depends on the private sector – because the new fund will finance only private investment and public private partnership investment. the leverage ratio is very high especially if you finance small and medium size enterprises There has been some questions ..why we are using such a big number of figure when talking about leverage, but it bases on the historical data of EIB lending…. Actually ‘times 15’ is a little bit lower than ordinary EIB leverage. .So nobody can current date this…but never the less it’s the best information we have at the moment.

MS: How quickly does this money get down to the ground to real people?

JK: To real people, will see the difference through SME financing already during this spring. So, EIB has said that even before the new fund is up and running..they will increase SME lending … SMEs are on the ground.. and if they can get loans to expand their businesses then we can see more jobs quite quickly.

MS: I’d like to get you a few opinions that we got on the Investment Plan, Lets Play it out

Angel Gurria, Secretary General, OECD: “We do not yet have yet a European intergrated economic..sorry electric grid, we do not have a telecom grid. Get those things and then..Not 315 billion – you’re going to get 3 trillion.

Mark Rutte, Prime Minister, Netherlands: “It can help! As long as we make sure this money is spent on projects which will boost growth – They should not be instead of investments which would be made by countries anyway..so these should be growth investments – innovation driven.”

Jean- Paul Fitoussi, Professor Emeritus, Institut d’Etudes Politiques de Paris: “We are in a political moment which is very dangerous for Europe..and if they will do everything for Euro..Europe to survive, including changing radically – present policies?”

MS: I want to pick up on that and ask – How flexible is Europe actually in terms of policies..

JK : flexibility is there when talking about fiscal rules. There is only a few countries who can afford to stimulate their economy. But the best stimulus what all the member states can do at the moment is to do reforms… that makes it more flexible …when talking about labor market or when talking about how easy business environment there is.

MS: Interconnected markets are very important to this concept..

JK: Yes, exactly. Actually there are a few areas that are in the EU in which we don’t have real harmonized single market . For instance, digital single market..we don’t have one and this would be very important for SMEs…
You can quite easily buy ties from the other countries but you cannot buy easily digital content – So that’s why we need to harmonize copyright regime, we have to look if we needed more harmonized VAT regime…data protection laws should be more harmonized . So I believe strongly in this single market path when trying to attract investors to invest in Europe.

MS: How long will it take for countries to agree to that because that’s always a stumbling block…when you have 28 countries..

JK: It’s not easy, it will take some time, but I expect that we have managed to create new digital single market – more harmonized energy market, more harmonized capital market to Europe in 3 years time…

MS : My final question to you, Mr. Katainen : what keeps you up at night? Deflation, Greece, the lack of growth, the investment plan?

JK : Well, Let’s say investment plan, because there are so much work to do… It can make a change. It will not change the whole world, it will not alone do everything, but anyway it will help private investors to invest in Europe, invest in real job creation projects all over Europe.