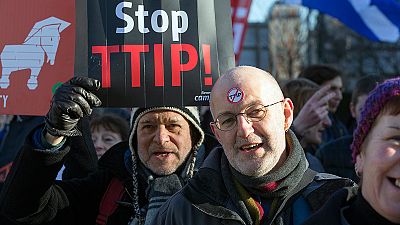 Food, cars, energy, finance and chemicals are some of the sectors affected by the free trade negotiations between the European Union and the United States, known as TTIP.
A controversial deal that the Committee of the Regions of the EU debated during its Plenary Session on 12th February.

The agreement being negotiated by Brussels and Washington aims to eliminate customs tariffs and to harmonize importation regulations. Its supporters claim the European economy could earn 120 billion euros per year due to the integration of a market of 800 million consumers. But critics say it could lead to lower food quality and safety standards and weaker social and workers rights.

Tariffs are already low – averaging 3% – so it is estimated that 80% of the potential gains will come from cutting red tape. Chemicals is a top sector in EU/US trade, representing more than 20%, both in imports and exports, with pharmaceuticals representing half of that. The European lobby for the medicines sector says there will be no bad effects for either consumers or the industry.

Richard Bergstrom, the Director General of the European Federation of Pharmaceuticals explained that for him it was a simple case of simplifying procedures: “Today the standards are essentially the same. This is about removing duplication. The biggest benefit will be that we can bring new medicines to patients faster by simplifying the regulatory procedures without lowering the standards. The secondary benefit will be for, particularly, smaller companies – big members can manage all this regulatory bureaucracy, but small companies from Europe or the US will find it easier to find money, have investors – if there is a clear pathway to reach both the US and the European markets.”

Food quality and safety is a more controversial issue in terms of public opinion, even though the sector represents around 5% of the bilateral trade. More local and sustainable food supply chains are advocated by environmentalist groups in Europe, like Greenpeace/ Their agriculture advisor, Marco Contiero, highlighted lower standards in the US: “The EU has banned 82 pesticides, toxic chemicals, which are still in use in the US. When it comes to the amount of pesticides residues than can be found in food sold to consumers, in some cases, the EU has limits which are 100 times more strict than in the US. The chemicals companies have been consistently asking the EU and the US authorities to make sure that the EU would drop its residues limits.”

Levels of pesticides and other additives are not the only concern. An window might open for food products now forbidden in EU like growth hormone-treated beef or genetically modified corn. But industry representatives including Mella Frewen, the Director General of FoodDrinkEurope said they have guarantees from the European Commission that this will not be the case: “Apart from the GMOs that you mentioned and the hormones that you have mentioned – which have been banned in Europe (and this ban will be maintained), there are other areas where we can find compromise. At the end of the day, it is a benefit for the consumers because they have more choice and it costs less.”

More than 99% of all European businesses are small and medium size enterprises.
But will they benefit, considering the competition from powerful multinationals?Among other issues, the EU Committee of the Regions is concerned about the Investor-State Dispute Settlement: a parallel legal system for corporations to sue States for laws that affect business revenue.

Markus Tons is the rapporteur on TTIP for the EU Committee of the Regions. He said: “I think the Commission should renounce such mediation mechanisms in TTIP, especially in the case of two entities like the US and the EU who do have strong jurisdiction and good courts. We don’t need such mechanisms.”

This is one of the issues strongly opposed by Germany and France, the two biggest eurozone economies. Invited to the debate at the Committee of the Regions Plenary Session, the EU Commissioner for Trade admits the deal will not be closed by the end of this year as hoped.

Cecilia Malmstrom/EU Commissioner for Trade explained: “We are aiming at finalizing this during the Obama period, if that is possible. I am aware that there is a lot of scepticism but there was an Eurobarometer just a few days ago showing that overall, the European Union citizens are in favour, because they can see that trade has made us prosperous in the European Union and this is something we need for growth and jobs as well”.

The Commission has also been challenged in court for not accepting a Citizens Initiative petition against the TTIP which has so far collected almost 1.5 million signatures in 21 countries. The civil society organisations have promised to keep the discussion alive.