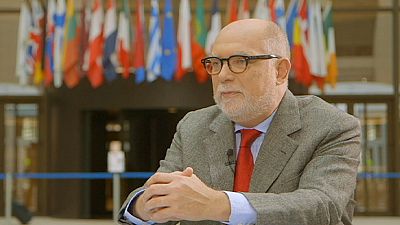 In this edition of Real Economy we ask do some EU member states need more budget flexibility?

Italy and France have both announced budgets that push for flexibility to pull their economies out of the doldrums, but those budgets are now under the close scrutiny of the European Commission.

Is this push for flexibility by some countries valid? Or are they looking for leniency in fiscal discipline during difficult times?

Some large countries believe Europe is seeing weakened demand, and annual budget cuts are making things worse. An example is France’s debt and deficit projections, and the situation in Italy paints is also difficult.

Other large countries with more balanced budgets, or even a budget surplus, think that relaxing budgetary discipline to stimulate economic growth just reduces pressure on governments to reform.

Italy and France want the EU to bend the rules, but others, like Germany, insist on respecting budget agreements.

The European Union has adopted the Stability and Growth Pact, aimed to ensure fiscal discipline. Every government has to comply with the same rules, adopting a budget with a maximum deficit of three percent of GDP. In addition, each state’s total debt must not exceed 60 percent GDP.

If those limits are not respected, the authorities can first issue warnings, which can be followed by the opening of an excessive deficit procedure. And, if that is not enough, there can be economic sanctions.

The agreement has been amended over time, first loosening the rules and introducing new parameters to take into account the particular conditions of each member state.

More recently, the rules were further reinforced and in some cases, made automatic, with the adoption of the Fiscal Compact, under which the balanced budget rule becomes a fundamental law of each state that approved it.

In the meantime the United States responded to the crisis with a strong stimulus plan for the economy which has led to an increase in the deficit and public debt. And Japan launched a policy that is even controversial in Europe.

The country is running a huge deficit and has the largest public debt in the world as a percentage of GDP. The first consequences of Abenomics were positive: consumer confidence rose and Tokyo’s stock exchange enjoyed its highest yearly gains.

But in the longer term, Abenomics seems to be losing steam, mainly due to a national sales tax hike.

Experts say that fiscal policy coordination is a bit like in a family where both partners have an income of their own, but nevertheless they need to discuss with each other how they are gong to spend it. It is important to ensure the other partner is not profligate because that could destabilise the whole household.

Therefore there is a need for flexibility, member states need to be able to adapt to lower or higher growth as well as changes in inflation, and other economic factors.

A very large part of that relies on peer group pressure and the hope that large countries behave as well as small countries. There are of course incentives: member states who do not respect the rules can be fined as much as 0.2 percent of GDP.

Italy is in its third year of recession with only marginal growth expected next year. The Italian Prime Minister wants to tackle reforms to drive investments for growth, but how does he plan to pay for it? By borrowing? Increasing Italy’s debt load?

The plan is controversial. How much does it worry businesses and investors? Do they think its necessary for growth?

Behind the postcard image of Italy is the reality that tourism accounts for about 10 percent of GDP. And the economy is still doing quite well, mainly due to the money spent by foreign visitors.

In recent years, Italians have had to tighten their belts, especially following the reforms adopted to put public finances in better shape.

But what should governments do to stimulate the economy? Some say borrowing more to spend more with that money invested in good infrastructure, productive projects, with intelligent, wise control of costs so that there is productive investment.

Others say what really matters about growth is private investment, and this is being held back by numerous factors including fragmentation of financial markets, lack of reform of job markets, and general low profitability of the corporate enterprises sector.

For the full debate, watch the video.