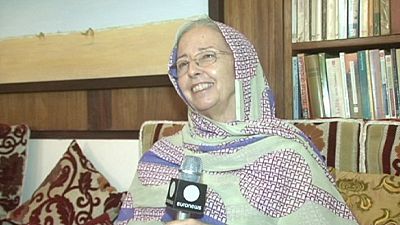 Nancy Jones Abeiderrahmane is an English woman living in Mauritania who recently published a book about her extraordinary life in the desert.

The book ‘Camel Cheese, Seemed Like a Good Idea’ recounts her tale of pasteurising milk in a land without cows.

At home in Nouakchott she spoke about her life and her 35-year adventure: “I arrived in Mauritania in July 1970. I first heard of the place in my final year as a engineering student. We had a project to create a milk factory in Mauritania. Only milk powder was available in Nouakchott at the time. We started in 1989 and it was a disaster. Traditionally milk is not sold here and it took us five years before we reaped any reward.”

“The milk is collected at source and delivered in the morning and evening. The guy comes with a container and is handed a note confirming the delivery and the amount. These notes later became a currency in the valley and it activated the economy, especially with cattle feed in the dry season.”

“This had a huge impact, relative to the size of our plant. We had 1,000 suppliers and people estimated that 3,000 families lived in the valley and by selling their milk people got cars and cattle, and children went to school, unprecedented. I knew it was very interesting.”

“I was presented the National Order of Merit with a Rolex Award and this made me very happy because its a unique honour.”

The Nancy Jones Abeiderrahmane plant began with the creation of a small unit to produce pasteurised camel milk.

At first she found it difficult to convince people to buy the new product, but by her determination she won through in the end.

The plant is the first pasteurised camel milk factory in the world and has become a template for others to follow.

Nancy has also contributed to the infrastructure of the city with the construction of an elaborate structure known as the Nancy roundabout.

After 35 years Nancy and Mauritania are one she says: “Mauritania is my home. Being Mauritanian is a state of mind, I feel almost Mauritanian.”