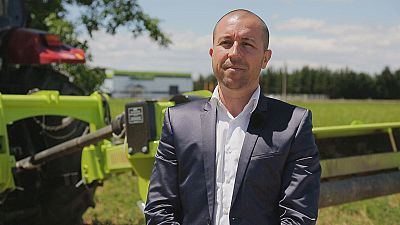 The Spanish economy is showing growth again, up 0.4 percent in the first and second quarter of 2014.

One explanation for the growth is the innovation shown by entrepreneurs in gaining access to international markets. An example is a business support cluster in Lerida in Catalonia which specialises in agricultural machinery.

Revenue is up 30-40 percent per year. Now there are about 20 employees compared to just three seven years ago and the company, Niubo Maquinaria Agricola, is expanding.

With the help of the cluster based in Lerida, the company has significantly innovated and developed what it can offer. The result is that almost half of sales are now international.

“When I took this job seven years ago it was a regional business. Now the company has a presence in more than 15 countries, in Latin America, in Africa and the largest areas of Europe,” explained Jordi Serrate, the CEO of Niubo Maquinaria Agrícola.

To develop his export sales, Jordi has also taken part in several working groups and trade missions to Portugal, Morocco and even to Columbia. But that’s not all. The business has improved its competitiveness by changing its working practices.

“With the help of the cluster we have developed new manufacturing processes across our entire product line, new materials for the manufacture of machinery and we have started our export activities,” he stressed.

The cluster in Lerida is one of the first in Europe to have been awarded the “gold” label for excellence. And here are some pointers as to how it works.

There is, of course, the business but also involved are consultants, universities, and engineers. In all the cluster has around 50 members. The average rate of internationalisation of its companies is 55 percent. Some of them have even managed to penetrate markets which are considered difficult like China or Brazil.

“We organise international trade fair joint participations, we also manage export groups with each representative in the foreign markets. And we also try to lead the companies at international level through commercial missions,” Enric Pedrós Cluster Manager, FEMAC pointed out.

The most innovative companies are those that export more. That is the credo of the cluster to which research, innovation and new technologies are absolutely fundamental.

“The future of agriculture is connecting the farm processing to the smart management systems. And right now in the cluster, we are cooperating with the Aerospace Valley Cluster in France and with the Photonics Cluster in Catalonia, in order to find solutions for that,” added Enric Pedrós.

“In my opinion the key to success is to have a professional and dynamic team, but also to belong to a cluster with other manufacturers of agricultural machinery to exchange our ideas and projects,” concluded Jordi Serrate.