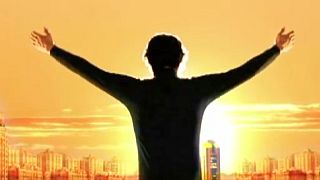 The exhibition will take place in the capital Astana – the first time in the former Soviet state. It will focus on the new energy challenges which are drawing global attention to Kazakhstan.

The flag was handed over to Kazakh Minister of Foreign Affairs Erlan Idrissov during a ceremony at the General Assembly of the Bureau for International Exhibitions, at the Organisation for Economic Co-operation and Development (OECD) headquarters in Paris.

He spoke to euronews about the importance of the Expo 2017 for Kazakhstan and the role the country is playing in the region.

“We are proud that Kazakhstan has been chosen as the place to hold this exhibition,” Idrissov said. “This is the first time the exhibition takes place in the former post Soviet space in central Asia, that will bring global attention not only to the issues of growth in our part of the world but also to the issues of global energy challenges. We believe that Expo 2017 will become a catalyst and a platform for brainstorming new ideas, new approaches to future energy.”

Out of the International Bureau of Exhibitions’ 161 members, 103 favoured Astana’s bid over the Belgian city of Liège.

Representatives will come to the capital to showcase clean and green energy technology and promote its use worldwide, as Rapil Zhoshybayev, Commissioner of Expo 2017 explained.

“We’re expecting more than 100 countries and 10 international organisations, he said. “It will promote the sharing of innovative technologies. I think Astana will be the birthplace of all the new advancements in science, technology and energy in the future.”

Talgat Yermegiyayev, Chairman of the Astana Expo 2017 expects the exhibition to be successful.

“We can say with certainty that all the requests set by the International Exhibitions Bureau and all of Kazakhstan’s promises to create the necessary conditions for the successful holding of the exhibition will be realised.”