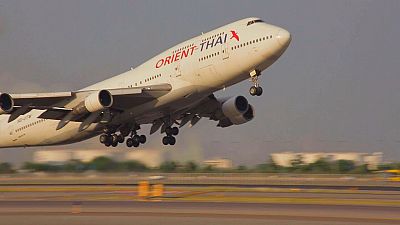 In this edition of Target, we discover one of world’s most beautiful airports, Survanabhumi in Bangkok. Here 300,000 flights take off and land from 71 countries annually.

Euronews reporter Serge Rombi takes up the story: “The second phase of the airport’s extension is now under way. The objective is to increase capacity in terms of passenger numbers and cargo services, making this airport the gateway to Asia.”

Operational since 2006 it is high-tech and hyper-functional, situated 25 kilometres from the city centre. Suvarnabhumi Airport Bangkok is consistently ranked in the top five airports in the world.

Boonrit Chitrabiab from Airports of Thailand told euronews it is due to unveil its latest makeover in 2017: “Phase 2 of the construction of Suvarnabhumi airport represents an investment of the equivalent of 1.4 billion euros. We will expand passenger capacity from 45 million to 60 million passengers per year.”

The work involves an expansion of the metro rail line to ferry passengers, the construction of a new business centre with parking facilities and the development of water and electricity infrastructure. Crucially there will also be an extension of the main terminal and a new satellite.

Boonrit Chitrabiab from Airports of Thailand continued: “The satellite is one kilometre in length and 216,000 square metres on four floors. There will be 28 gates, eight especially designed for the Airbus A380.”

As it stands Survanabhumi has a cargo capacity of three million tonnes per year – the equivalent cargo volume of the most efficient airports on the planet such as Shanghai.

Another singular feature of Survanabhumi is its unique free zone, with warehouses directly connected to the cargo terminal.

Wallapa Stirachavarn, Chief Strategist with Eagles Air & Sea explained why that is so important: “The benefits of the free zone are exemption from customs duties and zero VAT rates It saves time and money. Look, the cargo terminal is right there, 100 metres behind the warehouse.”

Wallapa Stirachavarn with Eagles Air & Sea said: “We have everything in place to be an Asian hub. Goods arriving here can be rerouted around Asia in 24 hours.”

It is an ambitious project and down the line Survanabhumi could accomodate 120 million passengers and 6.5 million tonnes of cargo annually.