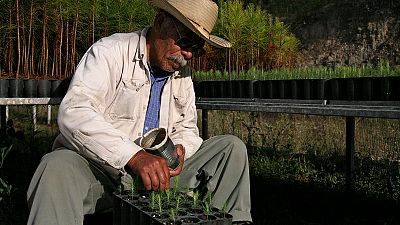 Mexico has one of the highest deforestation rates in the world. It loses about 330,000 hectares of forest per year due to illegal logging and conversion to more lucrative land uses, like agriculture, tourism, mining and urban expansion. But Mexico also showcases some best practices in sustainable forest management, like Ixtlàn de Juàrez, in the State of Oaxaca.

In Ixtlan they are convinced that the key to sustainable forest management is community ownership of the forest. Three decades ago the Zapotec Indians of Ixtlàn won the right to manage the forest communally. It was the end of federal government concessions and the beginning of more protective management, and at that time Romualdo was president of the highest community organism, the Comisariado.

Romualdo Pacheco Paz explained: “There’s no deforestation here because the community has a forestry culture, which means we care about forest conservation and we do it in a controlled way, because the forest is a treasure to us, it’s a source of work.”

The community of Ixtlàn has more than 19,000 hectares of forests, nearly 7,000 of which are under conservation and about 3,400 are exploited following a strict management plan. The decisions are taken by the “comuneros”, land owners, through the General Assembly and the Comisariado. They ensure that trees are cut just at the right moment – for the forest and for the community.

Julio Ruìz Aquino, of the Technical Department, Community of Ixtlàn de Juarez said: “The forest has its growing phases, and it reaches its mature phase. We want to exploit it at the right age, when the wood is good quality. We cut it but at the same time we guarantee that a new forest will grow”.

Every year the Ixtlàn community exploits about 20,000 cubic meters of forest and re-plants following a precise cycle. Pines planted five years ago will be around 40 metres tall in 35 years’ time when they will be felled.

The Ixtlàn pine nursery has been taking good care of 400,000 saplings since January. Aparicio and three other workers hand-picked about 40 kilos of seeds to guarantee the health and quality of the new future regional woods.

In the country’s capital city, the authorities are working to follow Ixtlan’s example. Mexico passed a key Climate Change Law in 2012 under the GLOBE Legislators ‘s Forest initiative. (GLOBE is the Global Legislators Organisation, made up of parliamentarians from over 80 countries committed to implementing laws that support sustainable development.) Ysenia Nolasco is working on improving the law that has already positioned Mexico among the first countries to legislate in support of forestry protection: “This Climate Change General Law is still mainly on paper, but it’s a great leap forward and a huge effort at a global level, because it’s very difficult to approve such a law by a majority of parties. We have already seen the first achievements. This law helped set up a Green fund where the Federal government injects resources that can be used to combat climate change”.

But back in Ixtlàn, Oscar Méndez Pacheco said that it still hasn’t been clearly defined who will benefit from the Green fund and how. Comuneros, like Oscar, the community accountant, complain about the law not mentioning “communities” but only “municipalities”. A key detail, according to them, to access future funds: “This law hasn’t been applied yet. So far we haven’t waited for the money coming from other institutions. Our sustainable forest exploitation brings benefits and our Assembly decides how to use them. A big percentage is reinvested in forest preservation”.

The reforms of 2012 pave the way towards local communities receiving the benefits derived from any future carbon compensation scheme (under REDD+). A goal that is still years away.