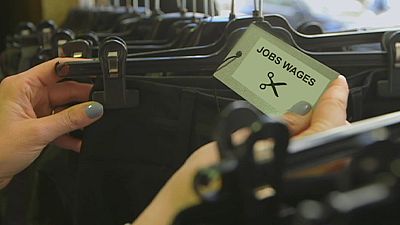 The Real Economy team travelled to Frankfurt, home of the European Central Bank, to take a look at the deflationary fears circling Europe and to find out if low inflation is becoming a self-fulfilling prophecy.

Porgramme host Maithreyi Seetharaman discussed these and other core issues with the ECB’s chief economist and executive board member Peter Praet.

In an economy like the eurozone price swings can amplify quite quickly. When the economy grows, gains momentum and imports more it inflates. At up to about two percent it can remain fairly stable, but any more and it can quickly fly out of control. When the economy stalls prices stagnate.

One day, Steve didn’t sell many cupcakes, so he had a sale but not many customers turned up. So he had another sale, but customers kept waiting for him to drop prices further.

Not making money, Steve told his milk and eggs suppliers that he would wait before placing more orders. Consequently, his suppliers cut prices to convince him to buy. Steve decided to wait for prices to fall even more.

The circle of suppliers started freezing their own purchases until prices fell as well. No one was buying or selling, profits plunged and one by one they all had to let their staff go! No jobs and no money meant people couldn’t buy Steve’s cupcakes.

Everybody’s business stalled as did the economy, causing deflation!

In this edition we have interviews and reports to illustrate the phenomenon. We travel to Bulgaria to find out what impact deflation is having there among shoppers and shop owners.

We also focus on Japan’s experience of protracted deflation to see if there are echoes in Europe’s current deflationary concerns.

Take a look at the video.