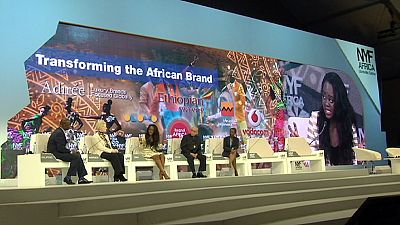 Africa is surging ahead with positive economic growth and macro-economic development across the continent. New funds flowing in, innovative financing and ever-increasing foreign direct investment are all evidence of a dramatic transformation. But instability and persistent security problems could impact on this impressive progress.

How to maximise Africa’s potential while grappling with its security issues was among the big issues tackled by economic and political leaders gathered in Libreville in Gabon for
the 3rd edition of the New York Forum Africa.

Some 20 years after its short but brutally genocidal civil war Rwanda is today at the forefront of Africa’s renaissance. According to the African Centre for Economic Transformation it’s among the 10 countries whose gross domestic product grew at the fastest rate between 2000 and 2010. Violence and insecurity have given way to economic resurgence.

Talking to Euronews at the Forum Clare Akamanzi of the Rwanda Development Board said: “We believe, very much, that security, insuring good governance, is extremely important has to develop the continent of Africa because that is the experience we had in Rwanda.

“But we also believe that Africa should not be seen as a block with either security or no security, because there are pockets that are not secure, or which have challenges to deal with and there are very many places in Africa that are very secure and that are ready to take advantage of the economic development opportunities that are there.”

“That said, even for those countries that are facing challenges of insecurity, you cannot say, ‘let us first wait and address this challenge completely before we develop’, I think they can be done simultaneously.”

Average growth across the continent was just under 5 percent in 2014 and is projected to touch 6 percent next year. It’s a testament to Africa’s resistance to the turbulence caused by the conflicts that still afflict the continent. Total security, it seems, is not absolutely essential for economic development.

“We can’t say that security is a pre-condition, because if we make pre-conditions we won’t develop anymore,” says Henri-Claude Oyma, CEO of BGFI Bank, Gabon. “But it is an important element. It’s important because we place confidence in the authorities that govern us and it falls to the government to put in place the necessary security to guarantee stability for investors like us, because as industrialists, as financiers, we don’t have the means or the mechanisms to ensure the security of all our economic interests.”

Nigeria is a case in point. An African and indeed global economic powerhouse, having recently overtaken South Africa as the continent’s biggest economy. Yet it struggles with severe security problems, as we have seen all too recently.

“We have a bizarre situation; African governments are told by Western governments that they need to prepare themselves to deal with security issues. Yet, the IMF and the World Bank refuse to allow governments to use their budget to fund the equipment, the resources and the training that are needed to deal with these issues.”.

Nigerian delegate Tara Fela-Durotoye, CEO of House of Tara International, said Nigeria needs outside help with its security problems: “I don’t have faith in my Nigerian government to resolve the issue, but I have faith that the world has seen that there is a problem in Africa, the world meaning developed countries who have the capacity and capabilities to be able to fight terrorism like they have done in the past.

“So for that reason, I have more faith because the world is now watching. If this continues, the number of female entrepreneurs like myself in Nigeria will reduce because the will not have the opportunities that I have had to growth my business to this extend.”

For Laurent Fabius, France’s foreign affairs minister, Africa’s problems are Europe’s problems: “We have to work to reinforce their security, because their security is our security. It’s so close to us, with these terrorist groups. They’re in one country, but they can easily cross borders and end u pin Europe.”

Against this backdrop the Bank of African Development has called for greater engagement from the international community to resolve Africa’s conflicts. For Senegalese singer and politician Youssou N’Dour the answer may lie closer to home: “We should wash our dirty linen at home. We should also have more meetings in Africa, it’s not just in Europe where we should decide things.

“Symbolically, that would show people here that the solutions, or at least the discussions, stem from Africa.”