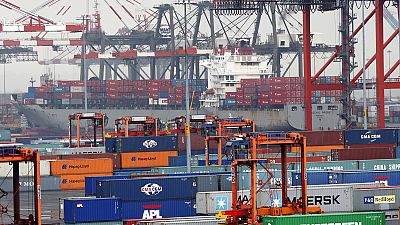 In just a few years 90 percent of the world’s demand will be from outside Europe. So this edition of Real Economy explores the world of trade, and deals with our largest and emerging partners across the world.

Now if you are wondering why we are talking about global trade, think about the fact that Europe’s free trade agreement could potentially add 275 billion euros to the EU’s GDP. That is like adding a country the size of Austria or Denmark to the economy. It would also mean an additional 2.2 million jobs here in Europe.

The anatomy of a Free Trade Agreement?

A Free Trade Agreement (FTA) is designed to reduce trade barriers between countries.

Barriers usually protect local markets and industries. They typically come in the form of tariffs: taxes on things like the import of trucks and commercial vans into the US.

But a barrier is not always a tax: regulatory restrictions, intellectual property rights and competition policies can also act as so-called Non-Tariff barriers.

A Free Trade Agreement aims to reduce or eliminate both kinds of barriers, making it easier and cheaper for countries signed up to the deal to trade with one another.

For customers, freer trade can mean more products on the shelves, more choice and lower prices.

But there is a downside. Relations are not always equal between large and small economies. A small economy may be forced to make too many concessions, a large one may not compromise as much on its trade barriers.

What FTAs does Europe have and what do they do?

FTAs become really important during difficult economic times because the natural knee jerk reaction for countries is to become protectionist. Trade restrictions went up in 2013, even compared to 2012.

That said, Europe already has deals in place with 50 countries from Central and South America to Africa to Asia. We are also talking to China, and the Transatlantic Trade deal with the United States is being hotly debated.

Free Trade Agreements can be of great benefit to small companies, like the Dutch design company, Droog.

Droog’s incredible designs have gone global, but to get there the company has had to navigate a labyrinth of individual trade agreements for each country it exports to.

Machiel Brautigam, Droog’s business director, told euronews: “At the moment we export quite a bit to the United States, quite often there is also a difference in terms of the technical elements for example with the lighting. In Europe you need to go for CE certifications and in the US you have to go for UL listings.”

“Barriers are hard to get by as a small company, and for us it is fine to deal with the strictest legislations which are out there as long as they are unified worldwide.”

To that end, the Transatlantic Trade and Investment Partnership aims to free up trade between Europe and the States.

It is on the table, but negotiators are having to make a choice – each side weighing up which of their industries to protect from competition from abroad.

The stakes are high, because a successful FTA could be invaluable.

Brian Ager, Secretary General of the European Round Table of Industrialists, explained the importance: “I think if you look at the relationship, at Transatlantic trade, it is pretty large: we’ve got something like two billion euros a day in transatlantic trade going back and forth. It supports about 15 million jobs on both sides of the Atlantic, it makes a very large contribution to our GDP, in this continent and in North America.”

Much of that two billion euros of trade per day goes through the port of Rotterdam: Europe’s biggest hub for import export.

America and the EU make up the world’s largest trading partnership, accounting for half of global GDP and one third of trade. Tariffs are below three per ent, but non-tariff barriers abound

These barriers have to do with public health, the environment and regulations on issues governments are not to keen to compromise on.

Minco van Heenzen from the Port of Rotterdam Authority said: “Trade agreements are very important because they always raise volumes of trade and lower costs. We are very happy with trade arrangements.”

We spoke with Jean Guy Carrier, Secretary General of the International Chamber of Commerce, who was previously with the World Trade Organisation.

euronews: “Multilateral Agreements don’t have much teeth right now. Is it a better way to do it in terms of having bilateral trade agreements?”

Jean Guy Carrier” “Business people always like a multilateral approach better than a bilateral, because the problem with bilateral the rules change in every market. And so if you are a small or medium sized company and wants to trade and you don’t have a legal department, sometimes it is a very daunting proposition.

“What happens with multilateral agreements is that the same rules apply to everybody. Its nicer, you sail around the world, you do business around the world and you know pretty well it is always going to be the same conditions. And so you can adapt to them.”

euronews: “But its going to take a while for that to be in full effect across the board. Where as a business do people see a compromise?”

Carrier: “Some compromises on standards are coming out – some very sensible measures, some of them have to do with health standards. If you’re going to be packing and shipping fruit from Nigeria, you have to respect certain ways of washing that fruit, how you put it into crates, how you ship it. Those kind of rules are used by countries as a kind of protectionist measure. They sort of exaggerate the value of those and they block a lot of countries – especially poor ones – from selling into their markets by using those kinds of things. There is some glimmer that we can begin to harmonise those kinds of rules. So that if there is a rule of how you bring a tomato into a European country it will resemble the rule for bringing that tomato into Canada or into the US or into Mexico.”

Europe’s market and its new suitors looking in

Take technology for example. Europe has been steadily losing market share in the high-tech industry in Europe and the US to Asia; so not only are they key for us as a target market but we have to attract companies from emerging markets to Europe.

The French market for IT services is the third largest in Europe, after the UK and Germany.

At La Défense in Paris there are major multinationals operating in high-tech industries based in different countries around the world, such as India.

Tata boosted Alti’s workforce and now boasts 51 percent growth in Europe. A well drawn up FTA, could expand Europe’s role in the group.

Abhinav Kumar, who is head of Communication & Marketing at Tata Consultancy Services, told euronews: “The relationship is growing on a good track. But what a free trade agreement will do is give a boost to this relationship. Experts predict that if FTA is signed, it could potentially double trade within two years, from 80 billion euros to 150 billion euros”.

The European Union has been hashing out a Free Trade Agreement with India for the best part of seven years, but there are sticking points over agriculture, labour standards and generic drugs.

Kumar concedes: “FTAs are not easy. Every FTA negotiator will tell you that it takes a long time to achieve. In most FTAs, the first 95 percent of things are easy to agree, which is where the safety is. But the last five percent is what takes time and can often delay the process.”

Alongside the IT business, Indian pharmaceuticals and car makers are eyeing the great potential of the European market.

Sunil Prasad, Secretary General for European Indian Chamber of Commerce, said: “Indian companies, as all multinational companies, expect returns. They know that investing in Europe is a safe bet. The business model that India has developed in the last couple of years very much matches with the sustainable model that Europe has developed.”

euronews: “We’re rejoined by Jean Guy Carrier, Secretary General of the ICC. How do you convince people in Europe that global trade is good for you?”

Carrier “There is still an entrenched belief by a lot of people – and it’s really not just Europe – that somehow global trade steals jobs from me and sends them to poor countries. And that kind of belief frankly doesn’t stand up to scrutiny. It has also been a belief that has not been denied by politicians.

“Trade creates jobs and the reverse – the protectionist tendencies that have been dominant for the last few years – do the opposite. In countries such as this one that we are standing in right now – France – they have export champions like no where else on Earth. That is what generates jobs in France. If France and Germany are selling cars into China – and they are – and suddenly they impose constraints on solar panels coming into France or some other Chinese products, necessarily you get a reaction and you start blocking the possibilities that create jobs.”

Does globalisation need an image make-over?

The sheer size and scale of global trade is awe inspiring and it is expected to grow between 4.0 percent and 4.5 percent this year.

We know protectionism is on the rise, but if it is done right global trade has the ability to create jobs and wealth for individuals across the world.