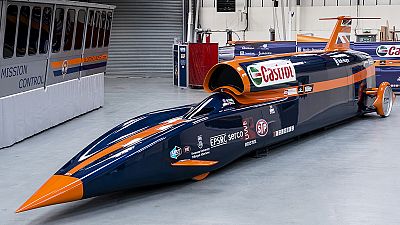 Piece by piece, the world’s fastest car is being built in a workshop on the outskirts of Bristol, England.

Known as Bloodhound SSC, it has the goal of hitting the heady target of 1,000 miles per hour, and inspiring millions of school children in the process.

Behind the wheel of the arrow-shaped machine is current world land speed record holder and military pilot, Andy Green.

For the first time, he opened the hatch to show us the driver’s seat.

“This is the cockpit for the Bloodhound Super Sonic Car. This is my 1,000 mile per hour office,” Green smiles.

“It has a 3D steering wheel printed in titanium to match my hands.

“We have three liquid crystal displays, and the two backup instruments that Rolex has produced, which is the backup speedometer, and the clock and stopwatch.”

“The precision of these instruments is essential to what we’re doing,” he stresses.

At the other side of the workshop lies a full-scale mock-up of the car, which gives a sense of its scale. At 13.5 metres long and three metres high, it looks like a cross between a jet fighter and a 9-year-old’s sketch of their dream dragster.

Inside there will be more than a few aerospace ingredients in the Bloodhound recipe, including at its heart a Rolls Royce EJ220 jet engine from a Eurofighter Typhoon. This is paired with a Falcon hybrid rocket from Norwegian company Nammo, a supplier to the European space industry.

For the moment the real car is still being built. Chief Engineer Mark Chapman showed us around: “This is the front of the car, this is where the wheels attach to, the front suspension,” he explains. “This is all carbon fibre, this is Andy’s office,” he says, gesturing to the cockpit. The lower assembly behind Green is made from steel. “The reason we’ve got a steel structure is it’s very, very stiff and very very strong,” Chapman says.

The rear part of the car where the rear wheels will be mounted is aluminium. “It’s very complicated machining, but a beautiful part,” he adds proudly.

The car is an engineer’s dream, and the dream of the team is to inspire young engineers.

For that reason, nothing here is secret. All of the data on how the car is built and how it will be tested and driven as it attempts to smash the current world land speed record will be shared with the world online, rights-free.

Alongside that push to offer open source information, the Bloodhound team visit hundreds of schools in Britain every year.

“Britain needs 100,000 graduate engineers per annum, and the system is only delivering 30,000, so it’s a really serious situation. And the problem actually boils right the way down to primary school, the need to get the kids really excited at a really interesting and young age,” he says.

The team have put enormous effort into creating eye-catching animations to bring the project to life. These include Bloodhound SSC racing and beating a fighter jet, and driving faster than a bullet from a pistol.

In Andy Green they have one of the world’s most convincing ambassadors for the thrill of driving faster than anyone has ever driven before in a car with the equivalent of 135,000 horsepower.

His eyes filled with excitement, he tells us: “right now I get to work with the best land speed record team in history, world class engineers solving problems nobody has solved before. Next year and the year after we actually get to test and develop this car, and I get to drive it and be the delivery part of that test team. And at the same time we get to transmit that message and share the adventure live to a global audience, we get a chance to inspire that next generation.”

The car should be ready for its first test run in spring next year – a humble 200 miles per hour (322 kph) on a Cornish air field. Then in summer next year the team will decamp to Hakskeen Pan in South Africa, a dry lake that has been specially cleared of small stones to provide a perfect surface for the record attempt.

Then, in 2016, the car will be readied for its ultimate challenge of breaking through the mythical barrier of 1,000 mph.