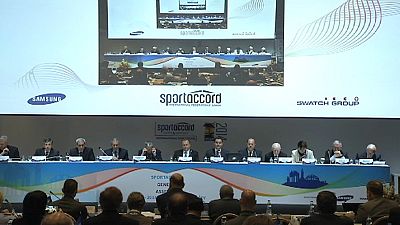 ‘Where Sport Meets’ was the slogan for the 12th annual SportAccord Convention held in Turkey. It brought together the 108 sports federations that make up the organisation. Despite not being well known outside the industry it was established almost half a century ago to help change the future face of sports.

Vlad Marinescu, General Director of SportAccord, said they are “helping and assisting” those involved in the sporting world. He explained that they are providing ‘services for members that can benefit them’.

The exhibition hall brings the invited guests together under one roof. There visitors can investigate how to cooperate with the different sports federations, find a new sponsor or see how to go about hosting a sports event.

The event provides guests with a wide range of opportunities like a game of drafts with world champion Daryna Tkachenko or a meeting with the president of the World Anti-Doping Agency Sir Craig Reedie to discuss the ongoing war against doping.

‘We’ve built a relationship with the pharmaceutical industry so that in many cases we know what is being produced and occasionally we are actually able to test it without telling anybody,” Reedie told.

Since May last year SportAccord is headed by the president of the International Judo Federation, Marius Vizer. His main challenge has been the promotion of less popular sports, however he’s hopeful.

‘The progress we make will be reflected in the quality of the top athletes in the Olympic Games and other big events,’ he said.

SportAссord has big plans for the future – it aims to increase the number of guests to next year’s convention and organise more multi-sport competitions like the World Combat Games and the World Mind Games. It’s not known how the International Olympic Committee will react to the organisation’s expansion plans, however the IOC President Thomas Bach has said there is room for dialogue.