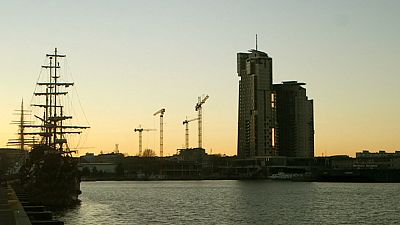 There are around 503 million people living in Europe and 70 percent of them, 350 millions, live in towns and cities with populations of over 5,000. So we’re looking at how the sustainable growth of our cities is imperative for overall economic health.

We explore urbanisation and the growth strategies of various types of cities. We also catch up with Martin Powell, Global Head of Urban Development for electronics and engineering conglomerate Siemens to talk about sustainability. And we look at technological drivers in Poland.

Over the course of the last century, Europe became predominantly urban – with two thirds of us living in cities, generating 67 percent of Europe’s GDP.

Cities bring consumers, workers and businesses together in close proximity. The result is specialisation. Highly-educated workers gravitate to cities because there is a high concentration of businesses, which then specialise. The presence of a car manufacturer leads to other companies specialising in microchips for cars, for example.

This results in cost reductions. But to maintain these workers and businesses a city must provide strong infrastructure and a high standard of living. And cities have problems like unemployment, and high CO2 emissions from transport and housing. So smart growth means finding innovative and cost-effective solutions to these problems.

Cities today face tough economic times. For growth they must create jobs, and not just any old jobs. They have to compete with other cities to attract the best talent, and to do that they need good infrastructure, and therefore innovation.

So – how do cities get smart? Martin Powell, the Head of Urban Development at engineering and electronics conglomerate Siemens, joins us.

Euronews: “Thanks very much for giving us your time. Let’s start by asking you the biggest question. Public Private Partnerships when it comes to growth in cities – how important are they?”

Martin Powell: “Going forward with the rates of urbanisation, with the big targets that cities will have to reach in the future, we see that these partnerships are going to become increasingly important. The beneficiaries of some of these projects need to really invest upfront in long term energy projects.”

Euronews: “When it comes to funding, are our strategies correct? Are there any fault lines in the way we are planning?”

Martin Powell: “I always believe governments talk but cities act. So cities have a lot of lessons to learn and they understand the funding models that are going to work. One great example is the Jessica Fund structural funds, European money proving hugely successful across Europe. And what this does is – as opposed to the traditional way of providing grants – it does loan and equity financing. These kind of funds are the way we are going to get the pace and scale of technology into our cities and the change that we are looking for.”

Euronews: “How sustainable is this rate of development that we need?”

Martin Powell: “Cities like London and the big cities are where people find employment. It’s very important for cities to protect that employment and to find the kind of industries that are going to keep those cities remaining attractive, while protecting the quality of life.

“Cities are setting very tough targets for climate change. They are experiencing unprecedented growth in terms of urbanisation. I would say the big cities, the very big cities are taking care of this quite successfully. But, the mid-size cities are the ones that are going to need the help.”

By 2025, 10 percent of the world’s population will live in just 37 cities. So just sheer size and scale means big cities have to keep innovating despite any economic crisis. But Europe is full of mid-sized cities where we all live. Giovanni Magi travelled to Graz in Austria after chatting with the who’s who of European mayors – to compare the growth strategies of the big boys with that of their mid-size cousins.

Graz, the second largest city in Austria, has seen substantial population growth in recent years and its international image has been reinforced by major investments in culture. But most European cities are battling with the consequences of the economic crisis.

To encourage growth, large and medium-sized cities are focusing particularly on transport and infrastructure, innovation, business incubators and supporting start-ups, energy, water and waste management. And making all of it environmentally sustainable.

Ignazio Marino, the mayor of Rome, said: “It’s obvious that we have to restart the economy and we are doing that by investing in urban regeneration projects, new more sustainable transport, and new businesses, including creating places where young people can develop their projects.”

Giorgio Orsoni, the mayor of Venice, explained: “Cities are joining forces to get their voices heard and to demand not only funding and resources, but a share in the decision-making.”

Across Europe, mayors feel the need for an Urban Agenda, a more specific policy for cities which is being discussed within the European Union.

Johannes Hahn, EU Commissioner for Regional Policy, told euronews: “Due to this pop-up pressure from city authorities we’ll be able to spend a bigger share of the structural fund money for cities. In the previous period 2007-2013 it was 40 percent of our budget, in the new one (2014-2030) I expect up to 60 percent to be spent in urban structures in order to improve quality of life.”

Siemens’ Martin Powell said: “I think big cities are facing some of the biggest challenges now. They are seeing increased congestion, increased pollution, and they are having to face these problems today. Mid-sized cities are the problem yet to come. And they have to fight very hard to get businesses to invest there and to ensure that their cities remain livable for the future.”

Euronews: “How necessary is it for cities, whether home to 5,000 or five million people, to be innovative in this current economic environment?”

Martin Powell: “We see cycles of technological innovation, from the railway to the motor car, and the Smart City now is the next cycle where we’re going to get lots of investment to enable today’s infrastructure. You have to invest in transport and energy infrastructure today because these projects take 20 to 30 years to show real benefits.Through better data, and better communication infrastructure we are able to deal with some of the short term problems, buying valuable time for long term investment.

Euronews: “Where does the private sector fit into all of this?”

Martin Powell: “The key is to really understand what that technology is going to deliver. If you don’t have a technology company at the heart of that discussion it’s going to be really hard to understand how you invest, the importance of that investment and how that is going to benefit not just this generation, but future generations.”

Money is the key

Getting the right infrastructure ensures citizens have an economically viable city. So money is key. Half of Europe’s Regional Development Fund – around 96 billion euros – has been earmarked for cities between now and 2020.

The Polish city of Gdynia on the coast of the Baltic Sea, is at the heart of a new trolley-bus revolution in Europe. Thanks to two projects funded by the European Union, the city has completely revamped its transport network across the entire region, including the cities of Gdansk and Sopot.

Trolley-buses make public transport cheaper than using the car. Piotr Malolepszy, the president of PKT, explained: “Regarding market share, based on the number of passengers using public transport, we estimate it is almost a third of all passengers. We operate the trolley-buses mainly in the centre of Gdynia and they are very popular.”

Jan Szymański, the director of the Department of Pomorskie Regional Programmes, added: “We’re trying to build the whole system to facilitate connections for people going to work in offices and factories, so they can use public transport; trolley-buses, trams, and also bicycles.”

The positive environmental outcome of the new transport system is measured by the reduction of electricity consumption, which corresponds to a reduction of 2,250 tons of CO2 emissions per year.

Marek Stępa, the Vice President of the city authority Gdynia, said: “It means we save a lot of energy, it teaches us how to manage energy more economically. With new technology, we not only use less energy but also return energy to the grid.”

Faster journey times, increased comfort, and reduced environmental impact all improve the quality of life in this city.

Social polarisation, poverty and unemployment are all challenges we face today in our growing cities. But it may also be the time for our cities to become the innovative centres for economic growth that we need.