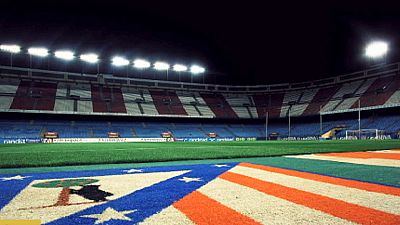 <p>Over five thousand athletes from 49 Olympic nations will compete in the Azerbaijan capital Baku in the first European Games. </p> <p>The country’s ancient and contemporary culture is at the heart of the Games’ logo, as<br /> Azad Rahimov, Azerbaijan’s Minister of Youth and Sport, explains:</p> <p>“The logo is one of the very key elements and very important key messages we have to deliver to Europe, to the fans of sport to the people who are waiting for European inaugural games.” </p> <p>He believes the games will help Azerbaijan to integrate more fully into Europe:</p> <p>“We are part of the European society and the process of integration is not only covering the sphere of politics, it covers the sphere of culture and sport as a huge part of the culture.”</p> <p>European Olympic Committee President, Patrick Hickey, hopes the Games will appeal to young people.</p> <p>“It’s full of vitality full of colour and full of action and it has a very youthful image which I think will be very attractive to the youth of not only Azerbaijan but of Europe,” he said.</p> <p>A careful look at the Baku 2015 official European Games logo reveals a flame, water, the mythical Simurg bird, a carpet and a pomegranate. </p> <p>These five core elements have shaped the country’s ancient and contemporary culture.</p> <p>It is hoped the Games will serve as a boost for European sport:</p> <p>“We have already written our names in the sporting history of Azerbaijan,” explained Olympic Wrestling Gold Medallist, Farid Mansurov. “Now with this logo we will be part of shaping the future of European sport.”</p> <p>Football fans will have the chance to see the logo, which was conceived by Azerbaijani Adem Yunisov, before the opening of the Games. </p> <p>The logo made its sporting debut this week in La Liga on the shirts of Atletico Madrid and will remain there for the rest of the season.</p> <p>Atletico Madrid players David Villa and Arda Turan spoke of the benefits of such a tournament:</p> <p>“We are sure that the games will inspire many young people to engage in sports and will spread the Olympic spirit all over Europe,” Villa said. “We will play with you.”</p> <p>“I am glad that Baku will host the first European Games which will unite people and countries through sport,” added Turan.</p> <p>The framework, the logo, the spirit and the will behind the games in 2015 will all play their part in creating European sporting history.</p>