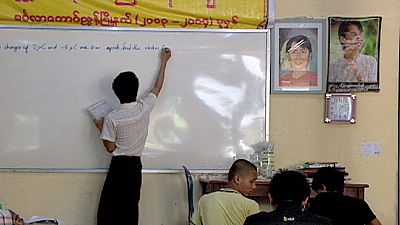 After half of century of military dictatorship, is Myanmar really on the road to democracy?

The country, also known as Burma, has started opening up to investors, scrapping restrictions on the media, and allowing tourists to visit the first time in decades.

Myanmar is seen as an ‘eldorado’ by some owing to its huge wealth of oil, gas and minerals.

Euronews’ Isabel Marques da Silva joined an EU delegation in Myanmar in mid-November 2013 to see how journalists, businessmen and NGOs were adapting to the seemingly new climate.

But is the change real? Euronews spoke to religious leaders inside the country, who said there were still ethnic tensions between Muslims and Buddhists.