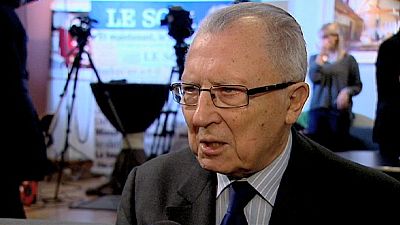 The state of the European Union came under “a sharp and uncompromising focus” during three days of debates amongst Europe’s leading political, cultural and media at Bozar in Brussels.

Delegates said Europe is at a crossroads and offered provide some clues as to how to solve its problems.

For Laurent Joffrin, editor-in-chief of Le Nouvel Observateur, a left-leaning political weekly, the EU club of 28 countries has become too bureaucratic.

“If there is one person who embodied the Europe that we know well, it is Jacques Delors. People were either for or against that kind of Europe but we knew who stood for it. Since then, national governments have shied away from appointing someone too high-profile. They want a minion who won’t overshadow them,” he told euronews’ Audrey Tilve.

MEPs claim that allowing voters to have their say on the next Commission president will boost turnout in next May’s European elections.

Not necessarily, said French columnist Bernard Guetta. So how then do we whet people’s appetites for Europe once again?

“We could work together on the question of social dumping, the environment, the monetary policy of our competitors. Firstly, we need to show people that as 28, or even 17 inside the eurozone, we are stand stronger against the likes of China,” Guetta said.

The only thing is, however, is that opinion polls point to a rise in eurosceptic sentiment. This is something that the EU needs to pay attention to, said French philosopher Michel Onfray.

“The old logic of Stalinist countries was that when there were problems in the Soviet Union, it was because the Soviet Union was not Soviet enough.” Onfray said in an interview.
“It’s the same with Europe. When there are problems, it is because Europe must be more European.”

To redefine what Europe stands and save it from disintegration, we should remember what distinguishes it from the rest of the world, argued Pascal Lamy, the former head of the World Trade Organization.

“Europeans are less likely to tolerate inequality compared to elsewhere in the world, such as the US and China. I think that the European identity is etched in our social systems,” he told euronews.

“We just need an extra 1 percent growth. If we don’t get that, those systems are at risk and so I think that even our European identity is at risk as well.”

After three days of debates, there was no magic answer founds for Europe’s problems; no miracle cure prescribed.

But it is clear that progress in the EU won’t be achieved just by idealising about it.