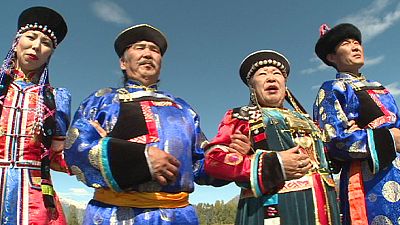 One of Russia’s most interesting republics is in South-Eastern Siberia on the Mongolian border – Buryatia: a rich variety of cultures and traditions are intertwined in its history.

In the past, every Buryat household had camels. They disappeared from homes during the 20th century. Now the humped animals are, once again, becoming popular.

“They say that long ago, long before we were born, the Buryats had a lot of camels. Now we want that tradition to revive,” he said.

The return of camels to national parks is one of many signs of Buryatia’s drift back to its roots.

Neighbouring Lake Baikal contains 20 percent of the planet’s unfrozen fresh water. The republic therefore has to prevent pollution, which rules out heavy industry.

A third of Buryatia’s one million residents live in its capital, Ulan-Ude – a modern and dynamic city with rising buildings, busy streets and a vibrant nightlife.

Outside the capital, Buryatia is a land of pristine nature. Baikal’s beauty attracts many visitors. Booming tourism brings income, but raises concerns for the lake’s wellbeing.

The revival of ethnic cultures pulls more tourists into Buryatia’s rural valleys. Traditional rites are still alive in local villages: they combine nomadic worshiping of nature’s spirits, with ritual offerings, songs and meals – like boiled lamb. Its meat is considered pure and healthy, and bones are used for fortune-telling.

“These high mountains…surround us, protecting us from various ills. We pray every morning to these holy gods – to our mountains and the deities that dwell at their peaks,” he said.

The love of nature is rooted in the healing properties of the local land. The tectonic fracture that created Baikal created natural geothermal springs that became therapeutic resorts in the 18th century.

“It’s nice to stand under the hot stream when the weather is cold, it’s a healthy and pleasant massage,” he mused.

Today, the so-called ‘valley of 100 springs’ is a site of mass pilgrimage. The mineral sources provide healing powers. Some people splash water onto their eyes, hoping to improve their eyesight. Others bring bottles to collect water for drinking.

The cult of nature is typical of Buryatia’s rural regions where ancient shamanic beliefs coexist with Tibetan Buddhism, creating a mixture of spiritual traditions. Euronews visited a village datsan, where a service was led by a local elder with a gift for preaching to deities.

“I would say it’s a mixed rite. The offerings are made to the shamanistic spirits that are bound by an oath to Buddhism that also makes them deities of the Buddhist pantheon. So it’s not a purely shamanistic rite,” he said.

A land of true religious diversity, Buryatia is also a home to Old Believer Christians – an Orthodox minority whose ancestors were exiled here after the 17th century division in the Russian church.

Known for their respect of rural labour, and love of traditional ways, the Old Believers are successful farmers devoted to protecting the Buryatian land from industrial mining of its natural resources.