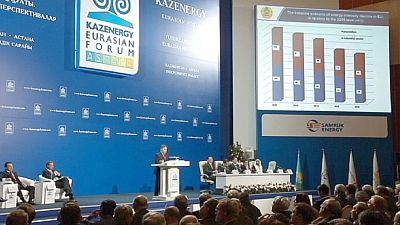 The world’s energy landscape is changing, but what will be next? This was one of the main topics during the KAZENERGY Eurasian Forum, an international energy conference in the Kazakh capital Astana.

The geography of oil demand has radically changed in just a couple of years; strong economic growth in Asia, the former Soviet Union and the Middle East has pushed up demand in these regions, while in the eurozone and the US demand is weak and declining.

This year oil demand in the developing world is forecast to overtake the industrialised countries for the first time.

In this new situation Asia is transforming from being an energy exporter to consumer.

“The Asian continent, including the Middle East, is now becoming a oil consumer. Taking into account the expected and possible consumption level in China and India, it becomes a very strong, very important consumer. In this situation Kazakhstan recognized our great responsibility to the international community to guarantee stable energy supplies to our partners,” says the Kazakh Oil and Gas Minister Uzakbay Karabalin.

So, demand trends are changing, but supply is changing too. With the depletion of oil and gas reserves energy companies are being forced to explore in harder-to-reach unconventional locations as well as to focus on non-conventional production, like shale oil and gas.

The Kashagan oilfield is one of the world’s biggest oil finds in decades. A decade ago development costs were estimated at $10 billion. Coming onstream has cost more like $50 billion because several artificial islands instead of rigs had to be built to resist the icy, stormy waters of the northern Caspian sea.

But the international consortium behind the project is happy.

“If you look at the overall costs, you could see where it has been spent because of the technical complexities of this project and the difficulties of working in shallow water depths at the North of the Caspian. And now the objective is to ramp up the production, up to the maximum capacity that we can achieve with Phase One, and to start to look at how we can increase the production levels thereafter with marginal projects like additional compression for injection and then future phases of development,” says Total’s Senior Vice President Continental Europe & Central Asia Michael Borrell. the French company is one of the partners in the North Caspian Operating Company consortium.

But the depletion of reserves and climate change bring new environmental challenges to our planet, and the energy industry cannot avoid colliding with them, as the industry’s top three new ventures are Arctic drilling, deepwater offshore output and unconventional oil and gas production. The new wealth is in remote, pristine areas, often operating with weak checks, balances and oversight.

“The oil industry is definitely making progress in improving its interaction with the environment and in trying to produce safer hydrocarbons, but as an industrial activity there’s always bound to be accidents and issues. On the whole the safety record of the industry when it comes to the environment has definitely improved over the years, and I expect it to continue to improve,” says Ernst and Young’s Ivan Sandrea.

A chorus of industry experts is now saying the oil companies should use this chance to develop new eco-friendly technologies before the market turns.

“We need to develop new technologies. The most advanced methods previously considered impossible are now becoming a reality. Because of high oil prices we can invest in expensive projects, now, because now we have the money to buy the best and learn how to use it. If prices fall tomorrow, the technology will still remain,” says the Deputy Chairman of the KazEnergy association Jambulat Sarsenov.

“So, the new challenges for the global energy industry require new approaches, especially from the oil producers. They have to react to these challenges very rapidly to keep their place in a changing market,” says euronews’ Natalia Marshalkovich, in Astana.