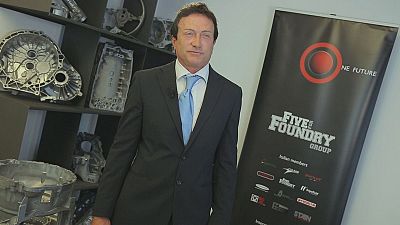 Business Planet’s Serge Rombi has travelled to Italy to get a handle on business networks, an Italian antidote to the financial crisis.

Reporting from Brescia he said: “In Italy’s third largest industrial city, unity is strength as businesses come together to boost competitiveness and innovation, while retaining their own identity and independence.”

Formed in 2008 in the wake of the financial crisis, the Five For Foundry group specialises in aluminium castings and supplies to European car manufacturers. Fifteen small to medium sized businesses make up the network including one from Poland, France and the Czech Republic. Two German companies are expected to join at the end of the year.

Vittorio Ori, the president of Five For Foundry, said: “Working within a network allows us to offer our clients a complete package, a complete product. Secondly we are able to offer prices that are 10 to 15 percent lower, thus we are more competitive and the client has only one technical and commercial partner.”

There are 640 jobs within the network with a turnover of around 118 million euros, which is constantly growing, especially internationally overseas the network generates 70 percent of the business, which is boosted by a well oiled organisation.

Ori described how the whole system began: “In 2009 we set up a collective to buy materials. This has saved us four million euros, which we invested in innovation across the network.”

The secret of the groups success is simplicity. A contract is signed based on a business plan with common goals. In Italy there are around 1,000 networks , which include 5,000 companies.

Aldo Bonomi, the president of Retimpresa and the creator of the network, explained why networks are so useful: “There are two possibilities, either you sell your company and become a shareholder and lose influence. Or you make yourself stronger by joining with others, that way you keep your autonomy.”

Preserving autonomy while improving research and development and working in international markets are some of the advantages of business networks. Aldo Bonomi continued: “Results show that sales have increased by 20 percent during the crisis.”

What makes a business network tick? Vittorio Ori from the Five For Foundry Group concluded: “The key to network success is, build a team and think big. Stick to the objectives of the programme and keep the network simple.”