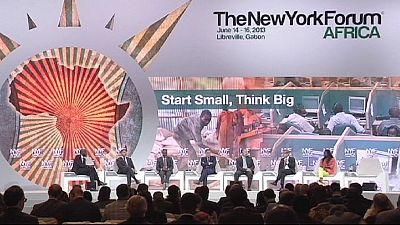 Euronews reporter François Chignac visited the Libreville, the capital of Gabon, to take a look at all things African at the New York Forum for Africa, this is what he found:

“As Europe is riddled with doubt and its economy suffers. Here in Africa it is green for go, some African states have registered remarkable economic growth.
Still many problems persist, poverty, a population explosion, health and security issues and need for good governance. Still, Africans are not turning their backs on the problems. Here they exchange ideas and initiate and develop programs. The New York Forum Africa in Libreville, Gabon is showcase for Afro-optimism.”

The emergence of African development concentrates on the the capital ‘I’ Independence for example.

The fight against violence, the battle to end corruption and the flow of capital out of the continent. As much as 1.3 billion US dollars leaves the cont, that is four times the external debt of Africa.

Africa is not a coherent entity, but a mosaic of 54 countries made up of 1500 ethnic groupings. Africa needs geo-strategic innovations to impose itself on the international stage.

Fatou Bensouda is a prosecutor from International Criminal Court:

“You cannot have peace and security without justice. So in all of these efforts that were are making on the continent, on development, on economic development, we must factor in the need for justice, you must have rule of law, you must have accountability. This is a atmosphere in which development can take place.”

“ I think all African and international investors have made it plain to decision makers that we need to accelerate reforms to our judicial system.”

Ivor Ichikowitz, is the founder and executive chairman of the Paramount Group:

“Economies like Nigeria are growing at rates the world has never seen before. So the truth is that no one country can lead this rise. A group of African countries need to get together and make this rise a reality. I’ve been calling for a long time for a collaboration between the major economies of Africa. A collaboration which is similar to the collaboration that makes BRICS works. I’ve been talking about an pan-African BRICS, I’ve been talking a BRICS concept that brings these large economies together and allows them to create policy which would interface with outside investors and other BRICS countries”.

“The continent posted an annual growth of close to five percent over the last decade. But for that growth to impact on the wider population infrastructure must be improved. With 200 million people aged between 15 and 24, Africa has the youngest population in the world, and it will double by 2045. It is therefore important to integrate growth to help the 150 million unemployed and African leaders must invest.”

“ We have an infrastructure deficit, that is clear. This damages intra-African trade, so it is important for us. To be able to join up the market is extremely vital to us.”

“If our continent began a real overhaul of governance, while strengthening its institutional framework and deals with the deficits of infrastructure, then we will be able to move towards double digit growth.”

“For entrepreneurs, we need a legal framework to be correct. We need a business friendly environment. So, for that to happen, we need governments to be really motivated in terms of reforming the system. And that is all we need from them. They don’t have to wait for the West, they don’t have to wait for anyone. It is simple. We sit down, let’s look at how can we make our country business friendly, and if they make it business friendly, get out of my way. Then more of us would come and we will do what we do. We start companies and we create jobs, the rise of Africa will happen that way”.

Football for Friendship scheme attracts more than a million youngsters